Apple recently posted a job listing for a Cloud Systems Software Engineer, which may be indicative of the company’s speculated plans to expand and create cloud-based services beyond what is found in today’s Mobile Me offering. According to the listing, the engineer would join a small team in creating ‘the future of cloud services’ at Apple’s Cupertino, California headquarters. 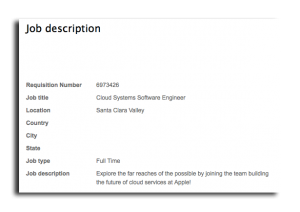 Other than saying that the team will be helping to build some of the “most exciting new products and service,” Apple did not reveal any details about the position.

Recently, Apple has been speculated to be building its North Carolina data center for new cloud-based offerings, including a digital locker service for purchased iTunes movies and music as well as photo streaming and social networking services.

For the digital locker service, the company will have to compete against Google with its own Android-based rival that’s also said to be forthcoming. The digital locker service would allow users to purchase songs through their respected music service–Google has yet to launch its own music or movie store–and store them in the cloud. This would mitigate the demand for growing amounts of copious storage space on devices as movies and music can be streamed via the Internet by users on demand.

Both Apple and Google were beaten by Amazon with the recent launch of Amazon Cloud Drive.

Also, Apple is said to be developing photo streaming applications that would compete with Facebook. Rather than have users manually update their photos to a service, Apple would let friends of iPhone owners, for instance, subscribe to the iPhone owner’s photo stream where images would automatically get pushed out to those who subscribe. Various privacy and safeguards would also be implemented.

Currently, Apple is offering a Mobile Me service that allows users access to calendar, email, contacts, and offers users the ability to create and host their website for $99 annually.