TechCrunch has the scoop on a new program Apple is rolling out for developers called “ViP” or Verification of iTunes Purchase, which TC magically connects to iAd. Sounds like a useful tool, but just because the program deals with ads, that doesn’t mean it’s related to iAd. 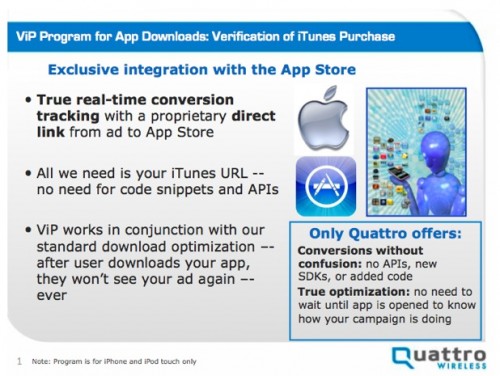 First, you’ll notice there’s no mention of “iAd” anywhere in this captured image. Second, what they’re offering is the ability to track sales conversions after a user taps on an ad for an app. You know how some developers offer free versions of paid apps and include links to the paid app in the free version, or offer freebies loaded with ads for their paid offerings? Well, this allows them to see how many of those clicks convert into purchases. In addition, once a user downloads an app, that user will no longer get those ads. By contrast, iAd focuses on bringing in outside advertisers; it has nothing to do with developers advertising their own apps within their apps.

To me, this sounds like a terrific and overdue tool for developers who have taken the freebie route. Tracking conversion in real-time can be critically useful. Obviating special code or APIs makes it simple. And eliminating ads for apps that users already have frees space and time for ads for apps the user doesn’t have.

Good news for some developers with minor benefit for users (nobody wants to see ads for apps they already have), but I don’t see how this contributes anything to the interactive advertising from outside advertisers being enabled by iAd.