Apple has put out a new webpage detailing their Wi-Fi Assist feature, which has been accused of blowing through users’ cell phone data since iOS 9 came out nearly three weeks ago.

Wi-Fi Assist is a new feature from Apple. Enabled by default, it works to speed up slow wi-fi connections by engaging your 3G or LTE radio. As a result, users might end up using up some of their data caps without realizing it – you could walk into a distant room in your home, for example, thinking you were on Wi-Fi, and end up actually on your cellular connection.

Many publications – including ours – put out articles telling new iPhone 6s and iOS 9 owners how to disable the feature for peace of mind, if not necessarily to save on phone bills. 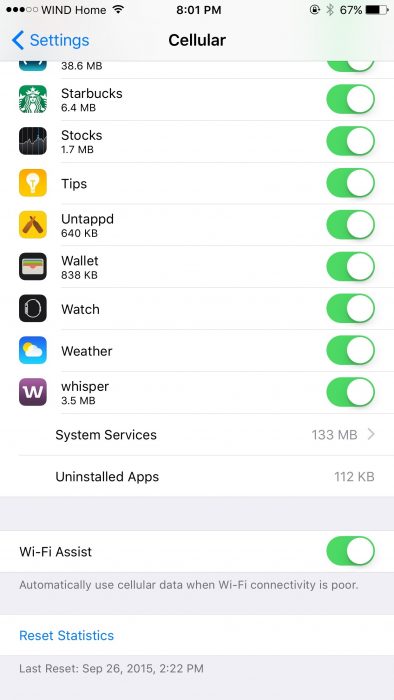 You can enable and disable Wi-Fi Assist in Settings, under Cellular.

As a result of the hullabaloo raised, Apple’s new Wi-Fi Assist support page discusses the exact times and cases where Wi-Fi Assist kicks in. It turns out that users should rarely see phone bills with more than “a small percentage higher” data use than in previous months.

The company also said that Wi-Fi Assist will not turn on automatically if you’re roaming on your data connection, so you don’t need to worry about racking up expensive roaming bills. It also won’t use your cell plan to download background data content – only apps you’re actively using. Moreover, Wi-Fi Assist won’t work with third-party apps like Netflix or Overcast, which stream audio and video, dow download email attachments.