Apple will introduce the iPad 2 tomorrow morning, putting an end to months of rumors and speculation. I’ve been following the rumors quite closely and think we have a pretty good picture of what the iPad 2 will look like and some of its features. Here’s my take on the iPad 2 rumors and what you should expect to see at the iPad 2 event. We’ll be covering the event live from San Francisco.

Below are my iPad 2 Hardware Predictions. I guarantee I’ll be right on some counts and wrong on others. Regardless, we’ll hear all about the iPad 2 starting at 10am Pacific. 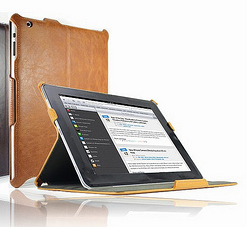 The iPad 2 will have sharper edges and a flat back, putting it more in line with the iPhone 4’s design. The iPad 2 will weigh in at the same weight as the original iPad, or slightly less. I don’t expect Apple to announce a big drop in the weight department. In what appears to be a leaked iPad 2 case design, you can see the general changes in the iPad’s exterior.

Apple will stick with the aluminum and glass construction that it uses in the majority of its products.

The iPad 2 will be very similar in shape and appearance to the original iPad. It will almost certainly have a 9.7″ display and while it might have a slightly higher resolution display, it won’t have a Retina Display like the iPhone 4. The iPhone 4’s Retina display packs 326 pixels per inch, which is an incredibly high density. I doubt that apple will attempt to match that in the iPad 2. The iPad has a beautiful display as it is, so why mess with it? I wouldn’t be entirely surprised if Apple plops a slightly better display in the iPad 2 and dubs it as a ‘Retina Display,’ but it’s not going to be the same as what you’ll see on the iPhone 4.

Apple will talk quite a bit about the iPad 2’s performance as it relates to video games, graphics and video performance. Processing performance will also be mentioned as it relates to multimedia apps and multitasking. Competitive products, such as the Motorola Xoom make a big fuss about performance and Apple will try to put a kibosh on competitor’s claims of superior performance. How one judges performance is in the eyes of the marketer however, so take whatever Apple says about ‘fastest, greatest, best, magical graphics’ with a grain of salt until you get to experience it yourself or the iPad 2 reaches reviewers’ hands.

Apple will likely add both front-facing and rear-facing cameras to the iPad 2. The front-facing camera will probably have so-so specs, but it will make it possible to chat with friends who are on iPad 2’s, iPhones, iPod Touches, MacBooks and iMacs.

The new cameras will likely be the biggest differentiator between the iPad and the iPad 2. The cameras setup will be the reason why we’ll see a lot of people dumping their original iPads for the iPad 2 models.

A faster graphics and improved hardware will make it possible to run more immersive games and complex apps. We expect to see a handful of apps and games featured during the iPad 2 keynote. I wouldn’t be the least bit surprised to see Electronics Arts, Rovio Mobile or other big-named publishers up on stage debuting iPad 2 apps that are exclusive to iOS.

Apple will likely show revamped in-house apps tomorrow. Since there will likely be an HD camera on the back of the iPad, I’d be shocked if Apple didn’t have an iPad version of iMovie ready to roll.

One weak point of the original iPad is its small single speaker that isn’t quite loud enough. It’s also a mono speaker, which isn’t the best solution when watching movies in landscape mode. Headphones are virtually a must when enjoying media on the iPad for extended periods.

The new iPad 2 will likely have a larger, louder speaker so you can watch movies with a friend without having to share earbuds or plug in an external speaker. 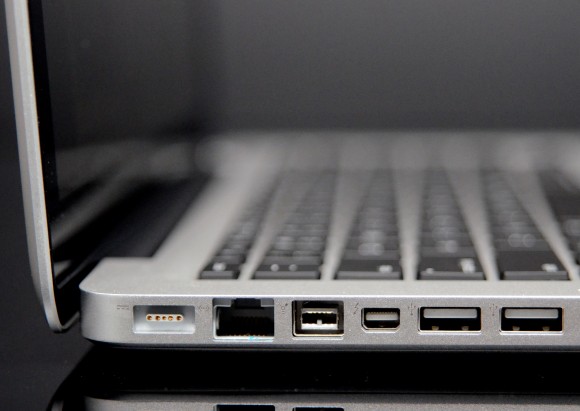 The original iPad can connect to external devices via its docking connector and an extra adapter. That solution isn’t very convenient. Intel introduced Thunderbolt last week and the MacBook Pro is the first device to feature the technology. Thunderbolt ports double as DisplayPort ports and Apple’s recently started selling DisplayPort to HDMI adapters. It’d be an elegant solution to be able to plug the iPad 2 directly into an HDTV or Apple Display with a single cable, such as the Kanex model Apple now sells. Did I mention Apple tapped Kanex for an exclusive on the DisplayPort to HDMI cable?

The highest price I expect to see for the entry-level iPad is $499. With more competition on the way, I wouldn’t be surprised at all if Apple dropped the entry-level price to just $399.

Apple often introduces products at high price points before making them more accessible with the introduction of second iterations. It wasn’t all that long ago that a MacBook Pro cost at least $2,000. Now a MacBook Pro can be had for $1,199. The original iPhone was $599, but the price dropped just a few months later. You can now get a free refurbished iPhone 3GS or pay $49 for a new one with a 2-year AT&T contract.

Apple’s in a unique position to undercut the competition for several reasons. It currently dominates the tablet market, which means it can use economies of scale to its advantage. It also has its own string of more than 300 retail stores that will of course carry the iPad no matter what. There’s no shortage of retailers willing to jump on board, even if margins on the iPad 2 are slim to none. iPad buyers are famous for buying tons of extra accessories, which usually have fat profit margins.

The iPad 2 will certainly have AT&T 3G options and I’m pretty sure Verizon will be getting into the mix. Verizon is already selling the current generation iPad as part of an iPad/MiFi bundle. That solution is less elegant. The big coup here will be if Apple can convince Verizon to sell its wireless service in the same way AT&T does for iPad users. That is on a month-to-month contract-free basis.

The iPad 2 will not have Verizon 4G LTE as some people have guessed.

Apple’s cut off sales of the original iPad to retailers. With stock running low, iPad shoppers will be out of luck. Apple won’t go long without giving eager shoppers a chance to give them more cash. We wouldn’t be surprised if Apple began selling the iPad 2 tomorrow or the next day. That may sound fast, but that’s exactly what Apple did when it announced the new line of MacBook Pros and started selling them the same day. In fact, I’m writing this article on the MacBook Pro I bought from Best Buy hours after the announcement.

Expect a full-court press from Apple’s marketing tomorrow onwards for the iPad 2. We’ll see a full smattering of iPad 2 commercials, ads and product placements. The Apple iPad 2 will make its way onto late-night shows and news programs within days of its launch. We’ll also see giant billboards plastering cities where tons of iPads are already sold, such as San Francisco and New York. Verizon and AT&T will likely run their own iPad 2 marketing campaigns to further bolster the new tablet device.

Within a couple of weeks we’ll start hearing from numerous app developers, case makers and headphone designers, all with the ‘perfect’ solution for your new iPad 2.