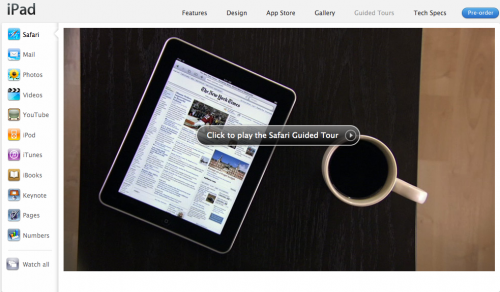 Apple’s released 12 in-depth guided tours of the applications bundled with the iPad and iWork. These videos are the closest you’ll get to seeing an iPad in action until this Saturday, when people will be able to actually play with an iPad at any Apple retail store.

The applications sure do look slick and the videos do an excellent job selling the device.s

I’m pretty certain I’m not going to buy an iPad for the time being since I don’t really need one, but some of these videos did move me an inch closer to pulling out my credit card. A couple of others left me scratching my head, trying to figure out why Apple’s calling features ‘great’ that clearly aren’t.

The Mail app guided tour shows that the on-screen keyboard is ‘Nearly the same size as a notebook keyboard’ and it confirms my suspicion that taping out emails isn’t going to be a very pleasant experience. In the video, you can see that the user’s hands are kind of floating above the iPad and his fingers aren’t touching the display until he needs to key in a letter. Just try typing on your own physical keyboard if you want to see how awkward this feels. This is necessary because the capacitive touchscreen can’t tell the difference between a finger (or palm) resting or typing.