The lower resolution screen, when compared to the iPad 3rd generation doesn’t bother me as much as I expected. The new iPad 4th generation comes with the retina display, but Apple left it off the iPad mini, probably to keep costs down. The iPad mini screen isn’t as crisp as the iPad with Retina Display, a disappointment for a device that most people will likely use for reading thanks to the smaller size. Apple can improve the mini greatly with a retina display.

Apple used the same resolution as the iPad 2 and shrunk it to fit on the 7.9 inch display of the iPad mini. Now buttons that look fine on a ten-inch display seem very small on the 7.9-inch display. It makes tapping certain things difficult. 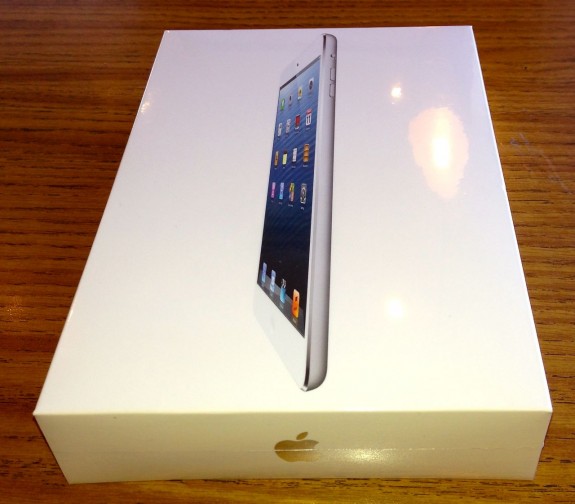 Holding the iPad mini feels awkward. The extremely narrow bezel doesn’t give the user much room to hold the mini with two hands. I’ve got very large hands and the Nexus 7 feels more comfortable since it’s nearly an inch smaller. That extra nine-tenths of an inch makes a difference.

Holding the iPad mini in landscape feels better, thanks to the wider bezel along the top and bottom of the screen.

Typing on the iPad mini in portrait while holding it with both hands works great because it’s easy to reach the center buttons of the keyboard and the buttons give plenty of room for those with big finger tips.

The iPad mini WiFi + Cellular with 4G LTE ships later this month, and is something mobile users may miss.

The lack of LTE will feel limiting and I may exchange it to get an LTE model when they show up later this month.

The iPad mini is a mix of great design and yesterday’s hardware. For now I’d give it a reserved thumbs up. I planned to not buy the iPad mini, but received one as a gift which may be where many iPad mini sales go this holiday season.

Check out our iPad mini coverage and stay tuned for a full iPad mini review.