According a report from Chitika just a few weeks after the launch of the iPhone 5, Apple’s latest handset already beats the Samsung Galaxy S III in web traffic. 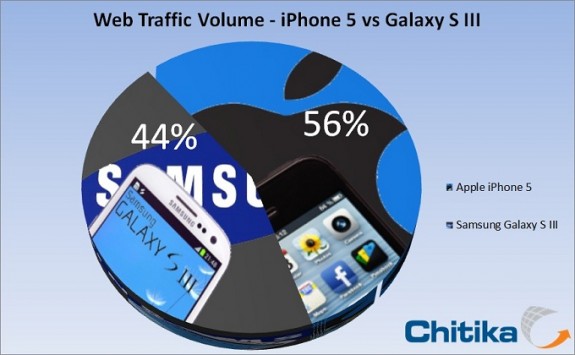 The Samsung Galaxy S III went on sale four months before the iPhone 5, and sold very well. Samsung’s phone even outsold the iPhone 4S in the month of August 2012, the month before Apple introduced the iPhone 5.

Apple sold an impressive number of iPhone 5s as well, however. It broke first weekend sales numbers for Apple, with over 5 million sold in the first weekend.

The sales numbers don’t mean everything, but by all accounts Samsung should have more phones on the market than Apple does with the iPhone 5, especially with supply constraints pushing delivery out three to four weeks.

For the average user these number mean websites will likely continue to build their mobiles sites for the iPhone first and Android second. It could also help explain why many apps come to the iPhone before Android. Developers want to make apps for the most active users, which means iPhone users according to these numbers.