For the first time since introducing the Lightning connector on the iPhone 5 last year, Apple has finally released a Lightning dock. Previously, the company has sold iPhone docks, but they were only for the 30-pin connector. These new Lightning docks are made for the iPhone 5s and the iPhone 5c — both have their own model since the shape of each phone is slightly different. However, the iPhone 5s dock will work with the older iPhone 5. iPhone 5s units enclosed in Apple’s official case will also work with the dock, according to one user who asked Apple Support.

Both docks are priced at $29 each, and only come in white (expectedly). They’ll also bring the usual charging, syncing, and line-out functionality that we’ve seen in the company’s previous iPhone docks. Other than that, the dock will come with something called “special audio porting” that aims to make speakerphone calls clear while the iPhone is placed in the dock. 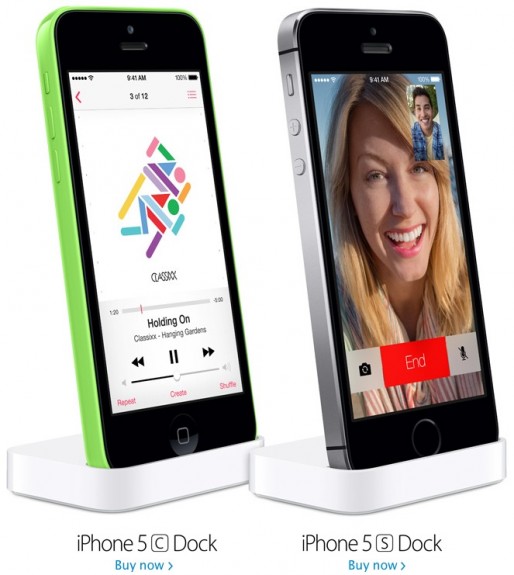 The iPhone 5S dock with Lightning cable also works with the iPhone 5.

The iPhone 5s is Apple’s latest flagship device, sporting the company’s new A7 64-bit processor and new M7 chip that is exclusively for tracking motion in fitness apps. The phone also comes in a new gold color, as well as a Space Gray that replaces the black model, although there’s barely a difference between the two.

Apple also announced the iPhone 5c, which is aimed to be the replacement for the iPhone 5. The 5c sports the same internals and performance as the iPhone 5, but comes with a new plastic outer shell that comes in several different colors. They definitely look cool, but we’d suggest skipping the iPhone 5c and just get the iPhone 5s instead; you’ll thank us later.