As soon as Apple releases an iPhone some crazy people start dropping the thing on purpose. An iPhone 5s vs. iPhone 5c drop test already hit YouTube along with some scratch test videos showing that the iPhone 5c may not hold up as well to pavement as the iPhone 5s, though it does hold up better than we expected. Here’s a few videos to check out before deciding which phone will hold up better to a user’s punishment.

While many already pre-ordered and received their iPhone or others got in line early on release day, we know that some undecided buyers still don’t know which one to pick. Do they go with the higher cost iPhone 5s with more horsepower and a more elegant design or the colorful iPhone 5s with the plastic back sold in many bright colors, but only shipping with iPhone 5 level specs. We think the iPhone 5s will make buyers much happier in the short and long term. To add some credence to this view, check out the drop test and scratch test videos we’ve found.

Round One: Android Authority Drop Test

The people at Android Authority dropped the iPhone 5s three times, once on its back, then on the edge and finally with the screen facing down all from chest level. The iPhone 5s held up very well with only a few scuffs on the frame after the third drop.

As expected, based on experience with past iPhones, the iPhone 5s drop test resulted in little damage.

The drop test of the iPhone 5c seemed like it would fare well at first with no serious damage until the third drop test where they dropped it on the screen. As you can see, the display shattered. 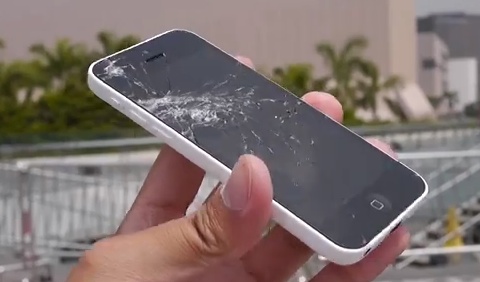 The iPhone 5c did well in the first two drops but the screen shattered in the third drop.

We think this test proves only one thing. After three drops someone’s more likely to break their iPhone. We’d need to see hundreds of drops to decide if the iPhone 5c really doesn’t hold up as well as the iPhone 5s. However, with the plastic back and lower price, we’re not surprised that it broke first in this video.

While not a drop test, this next video shows the iPhone 5c placed in a bag with some coins and sharp objects to test the phone’s scratch resistance. After shaking the phone up in the bag, it didn’t show any scratches. Then the person scratched the back with a key and with a sharp object. It resulted in some scratches, but not as bad as one might expect.

Here’s a similar video that shows no noticeable wear after the same kind of bag test.

iPhone 5s or iPhone 5c buyers should consider getting a warranty on their phone. Apple Care + offers one for $99 while other warranty sellers, like SquareTrade will also insure the phone against improper use and damage.