During the past few weeks it has become as fashionable to hate on Apple as it has been to own an Apple product.

But, unless you’re doing your due diligence on every gadget in your bag, dorm or home, you might want to reconsider hating on a single company.

In case you missed it, The New York Times, Nightline and others have been investigating Apple’s factories in Foxconn for labor issues and violations. The scrutiny is not new, but the new allegations and investigations miss the bigger picture. 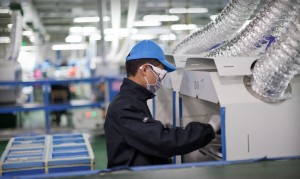 Noah Kravitz of TechnoBuffalo raises some interesting questions in his post, Hating on Apple is Stupid, Unless You’re Gonna Hate on Everyone, about the scrutiny we place on Apple over the rest of the huge tech companies, like Samsung, Amazon, and Nintendo to name a few, who use Foxconn to assemble the gadgets you love.

Kravitz surmises that the hatred of Apple is linked to the company’s record stock prices and insane sales numbers or, possibly, by a prevalence of Apple customers who, “fancy themselves the kind of people who themselves care about Taiwanese factory workers they’ve never met.”

When it comes down to it, Kravitz hits the nail on the head;

If you’re really offended by what you’ve heard about the way a company does business, don’t do business with them. But make sure you vet their competitors before you go doing business with them,either. You might not approve of conditions in the Foxconn plants that make iPad 2s, but are you sure you’re okay with how Kindle Fire assemblers are treated? What about the plants that churn out Galaxy Tabs, are they better? Or Transformer Prime – the Prime assembly lines are cool, right? Not sure? Better not buy any of those tablets, then.

In no way is Noah Kravitz, or myself, saying that labor violations and work conditions at Foxconn don’t matter. Rather, raising the point that Apple isn’t the only company profiting from affordable Foxconn labor.

When it comes down to it, consumers are buying expensive gadgets from extremely complex global supply chains with transactions across multiple borders.

Figuring out the most ethical, human or environmentally friendly gadget to buy can be a daunting task, a task not every shopper wants to deal with or worry about. Before you go out and buy a non Apple product because of the treatment of workers, you should check out how your Kindle Fire or Galaxy Note 10.1 is being made.