A new Apple patent shows what the iWatch might look like based on work done at Apple’s R&D labs. The patent shows a wearable video device that looks a lot like a watch, wrapped around a user’s hand and explains potential iWatch features and how it could interact with an iPhone.

Rumors of an iWatch are picking up in 2013, with claims that Apple has over 100 employees working on an iWatch and a new patent giving a peak into the minds of Apple designers. While Apple has yet to speak about a wearable computing device or a watch, many are calling the device an iWatch.

The latest iWatch patent is for a “wearable video device” with a flexible touchscreen display, that looks a little like a slap bracelet from the 90’s, but with high-tech features. 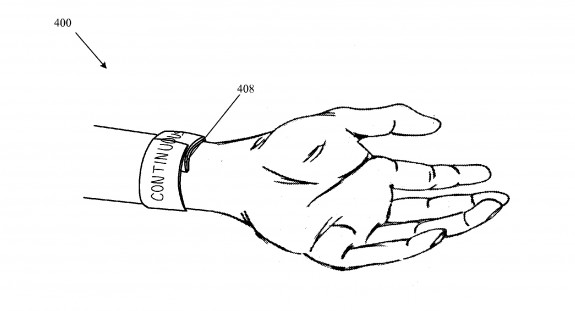 How the Apple iWatch could look based on Apple R & D.

AppleInsider spotted the new Apple patent at the USPTO, which the agency granted on February 21st. In addition to a long detailed explanation of potential iWatch design and features are a large collection of images showing how you users might wear the iWatch and what an iWatch from Apple might look like.

Apple’s version of an iWatch would connect to an iPhone or iPad with Bluetooth or WiFi, and the patent points to using WiFi to stream video to an Apple iWatch. The device could also serve as a second screen, offering a natural place to keep a map visible while walking. 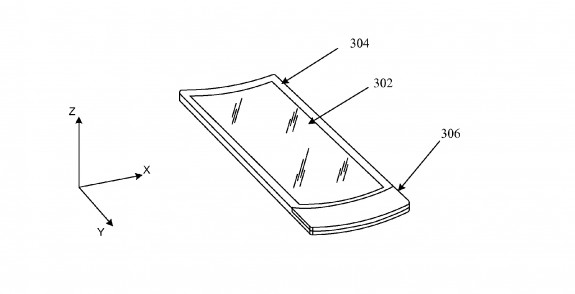 One example shows the iWatch type device detecting the edge of the screen to automatically make use of the right amount of the display. This would allow for a one-size-fits-all style of device that adjusts how much of the display is used based on where edges of the device are.

The patent suggests that an iWatch would allow users to perform tasks like existing smartwatches, such as getting email and text alerts, replying to messages with a small keyboard and checking playlists. 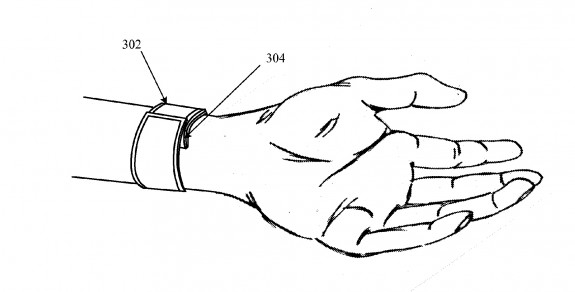 We’ve heard about flexible batteries and flexible displays for years, but the tech may finally be catching up to the point that a company like Apple could build it into a watch, which makes more sense than a roll-up phone.

The iWatch render video below shows one example of what an iWatch could look like, and some possible features, though Apple’s patent looks to go further than a watch.

Why is Apple patenting a “wearable video device” instead of a watch you ask?

Well, according to Apple SVP of Industrial Design Jonny Ive, Apple is very careful about the names it uses when thinking about new products. The term watch immediately sets size, shape and function limitations like those we’ve seen in iWatch concepts and iWatch renders. As Ive explains in the clip below, by keeping the name out of it, Apple looks beyond the box to solve a problem, which may be how they ended up with a patent for a flexible video display that connects to your iPhone and could replace your watch.

While Apple patents new ideas frequently without brining products to market, but the timing of this patent could be a sign that Apple is actively pursuing wearable technology to compete with Google Glass.