Apple has not been shy to kill off aging technologies that are on their way out, and it’s repeating that this year with the late 2013 release of the new MacBook Pro notebooks. Optical drives, hard drive storage, and low resolution display are all on their way out.

In the recent past, Apple had offered two series of “Pro” notebooks, but now Apple is standardizing on a singular MacBook Pro branding rather than maintaining a separate MacBook Pro with legacy technologies and a MacBook Pro with Retina Display line that is slimmer and eschews the legacy ports. Now, with the new MacBook Pro, Apple is merging both lines into a single product brand.

The new MacBook Pro carries with it a lot of similarities with the older Retina Display cousin, including the Retina Display resolution screen. And now, Apple has killed off the optical drive on the MacBook Pro, a nod to the death of CD and DVD storage as consumers are moving towards the cloud for storage, backup, and even for consumption of content thanks to stores like Amazon’s Video on Demand, Apple’s iTunes, and Netflix among others. 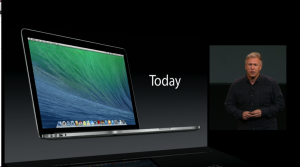 Also resting in peace is the standard optical disc drive. Rather than a standard hard drive, Apple is now using flash-based storage on the MacBook Pro, another feature that was borrowed from the older MacBook Pro with Retina Display of yore. The new MacBook Pro comes with standard flash storage, offering consumers more reliability as flash drives are less prone to failing in harsh conditions and also allow for lighter, thinner notebook designs. Another benefit is that read and write speeds are faster, which is a must for displaying content on the high resolution display while conserving battery power.

And the best part about this year’s refresh? Lower prices. Given the rapid improvements and innovation in technology, prices are dropping so Apple is able to deliver more at a more affordable pricing. The drop in pricing between a 13-inch MacBook Pro–with this year’s storage upgrades, Retina Display, slimmer and lighter design–will make it hard to choose between the Pro model and the more ultraportable MacBook Air at the same screen size.