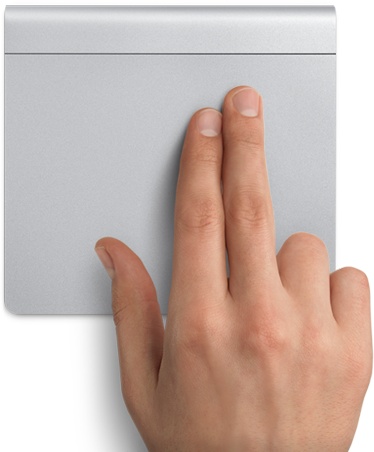 Took them a while, but Apple has finally released their long-rumored and longer-anticipated Magic Trackpad, a Bluetooth-enabled multi-touch input device that’s basically a Macbook touchpad for Mac desktops.

It’s either little or big depending on your perspective. The same depth as a wireless Mac keyboard with a square footprint, so the touch area is about 4″ x 4″, give or take. Bigger than a notebook touchpad but smaller than a Bamboo Touch. Aside from it being a separate device, it works just like a Macbook touchpad with click-anywhere functionality and swipe, scroll, and rotate gestures. Finally, you Mac folks can get the same multi-touch experience on your iMacs as you get on your Macbooks instead of the mix-and-match experience with the Magic Mouse.

No indication that it works with Windows, but I’m sure some enterprising modder will have a solution for that soon enough. Price is $69, which is actually not bad. By comparison, the multi-touch Bamboo Touch is $49 and includes four programmable buttons but isn’t wireless and has a broad border around the actual touch area. I will be keeping an eye on this since it comes closer to matching the wireless touch control I want for my Windows media center. If an all-new version of Apple TV is launched this year, I would expect the Magic Trackpad to be a big part of that.

Side note: Apple, why, oh why, are you wasting resources on your own AA battery charger and what appear to be your own branded batteries? Seriously, you couldn’t go third-party with that? Not everything needs to be done in-house.