Weeks after Apple launched the iPhone 5 with its new Lightning dock and on the day that the company released the new iPad mini and iPad mini fourth-generation, both of which sport the new standard, Apple finally begun to sell the Lightning to Micro USB adapter in the United States.

While the adapter has been available in the United Kingdom since September, those in the United States with the iPhone 5 were made to wait for the adapter to become available for purchase. Very conveniently, Apple decided to put the accessory up for sale on its website today for $19 and shipping times of one to three days.

This means that those with an iPhone 5 on AT&T, Sprint, Verizon or another carrier can now purchase one of these to hook up with the more common micro USB adapter for use with charging and syncing. Many users likely have Micro USB cables laying around and better yet, might have long Micro USB cables laying around which will allow for more maneuverability when a device is charging or syncing. 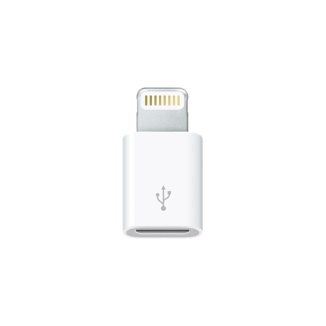 The Lightning to Micro USB adapter is now available in the U.S.

Apple’s switch to the new dock connector was heavily rumored right up to the launch of the iPhone 5, a device that came with the standard and was the catalyst for Apple’s other launches which included the two new iPods and the new iPads which brought unification across Apple’s iOS devices.

The launch of the Lightning to Micro USB adapter in the United States comes a few weeks after Apple started offering the 30-Pin to Lightning Adapter which allows for users to use Lightning-compatible devices with accessories that still use the 30-pin dock standard.