Apple is exploring a new concept for its retail stores that would allow Apple Genius Bar service associates to backup customer data on an iOS device–such as an iPhone, iPod Touch, or iPad–to a local wireless server or hub located in the store. The backed up data then be transferred to a new or refurbished replacement device when a customer brings in an iOS device with hardware issues. This would allow Apple to quickly backup and help customers restore data on their phones to new replacement devices that are covered either under the standard manufacturer warranty or through AppleCare/AppleCare Plus. 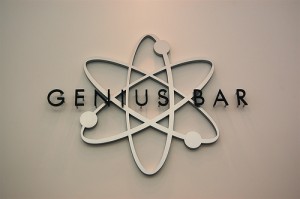 While the concept is similar to how Apple’s iCloud service is handling device backups right now, the idea of backing data up to a local server located in the store rather than to a remote server would allow Genius Bar associates to quickly perform the backup and device restore when a customer is in the store. This would allow Apple to service the customer quicker than if Genius Bar reps had to perform the backup to iCloud’s remote server. Quicker service time would also allow Genius Bar reps to handle more cases on a daily basis.

After the Genius Bar rep would restore the backed up information to the new replacement device, the user’s information on the server would automatically be deleted.

According to 9to5 Mac, the system is being tested right now at a location near Cupertino, California. Apple may begin to pilot this idea to select Apple stores by mid-2013 with a wider deployment by the end of 2013.