The new MacBook Air still starts at $999 for an 11.6″ ultra-portable machine running the new OS X Lion. The new Air sports Intel Core i5 or i7 Sandy Bridge processors with speeds of 1.6 GHz on the lowest end an 11.6″ model with a 1.8 GHz option available. The larger 13.3″ Air will ship with a 1.7GHz processor and a 1.8 GHz option available. Unfortunately the graphics chip is still just the Intel integrated graphics with a dedicated chip unavailable.

Base models contain the new Thunderbolt port, which provides speeds up to 20 times faster than a typical USB port. Apple includes this new connection on all of its new Macs starting with the MacBook Pro released earlier this year. Users can daisy chain in a series multiple devices for storage, display and more to a single port.

The Flash storage replaced traditional spinning hard drives on the previous refresh. These new models push the speed a little with a slightly faster version. We heard rumors that the smallest drive available would be 128GB. That rumor was wrong. The 11.6″ model starts with a 64GB drive just like last year’s model. You can opt for a 256GB drive on the smaller Air this time and a 128 or 256 GB drives on the larger.

The Air shines with a new blacklit keyboard like the first generation model and all of the company’s MacBook Pro models. Fans of the line were disappointed when last year’s model left out backlighting so Apple brought it back. 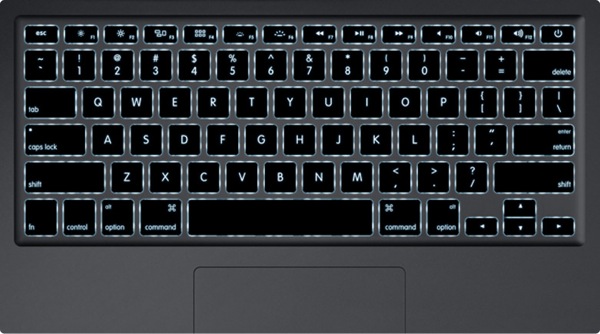 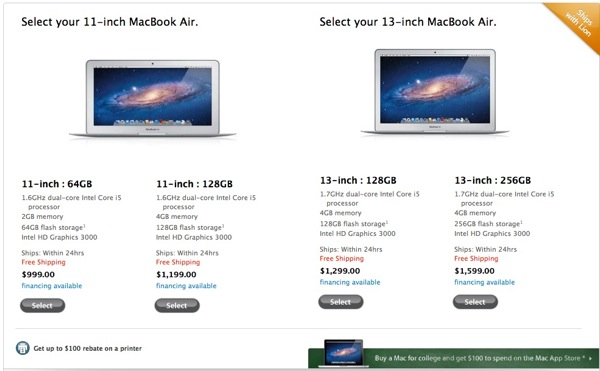 Four different base models will be available as follows:

During their quarterly earnings call Apple confirmed that Lion would ship today. The refreshed Apple MacBook Air will run the upgraded OS out of the box while older Macs will require an upgrade downloaded from the Mac App Store. 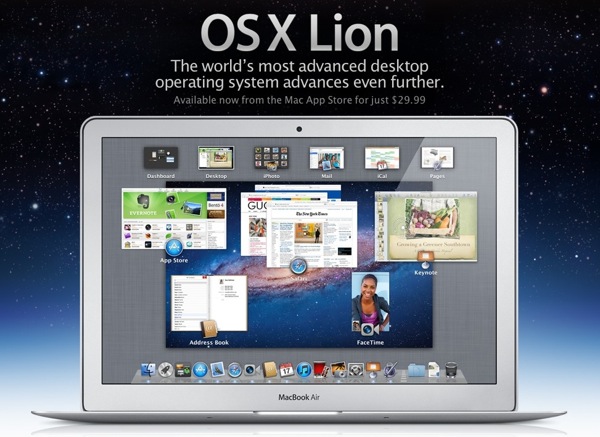 Apple Mac App Store finally shows the link to upgrade to the new OS which for the first time can only be downloaded from the App Store unlike past OS X upgrades which were available via optical disk. Apple will reportedly sell OS X Lion on a USB drive at retail locations in August.

The technical specs for the new MacBook Air are as follows: