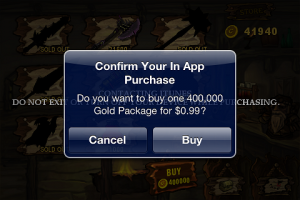 For example, after an app is purchased, even if it’s several minutes after, the first time the user buys virtual goods inside a game app, a password would need to be entered. This would reset the fifteen minute window again and would allow users to continue to make hassle-free transactions as the first in-app purchase was authenticated.

According to an Apple spokesperson, “With iOS 4.3, in addition to a password being required to purchase an app on the App Store, a reentry of your password is now required when making an in-app purchase.”

Apple’s response may be due to criticism from parents and legislatures. Parents have complained in the past that after they make an app purchase on behalf of their child, a witty youth may exploit the fifteen-minute window to make in-app purchases in games or other programs. This latest measure in iOS 4.3 definitely helps to curb that.

Still, it appears that legislatures may not be satisfied. Congressman Ed Markey have called upon the FTC to examine how Apple markets and delivers apps and games to children.

While Apple’s moves may seem to be pro-active, I’ve heard of a few parents complaining about how they were outwitted by their tech-savvy children while waiting in line last summer for the launch of the iPhone 4. One aunt remarked how her nephew had used her iPhone, asked her to purchase an inexpensive game for him while he was using her iPhone, and then without her permission had downloaded several other more costly games to her device without her knowledge or consent. The sentiment was echoed by at least three other parents who were standing adjacent to us in line.

At the same time, I also recognize as a user how frustrating it would be if Apple really tighten its policy by requiring a password every time an app is downloaded, even if it’s in consecutive order within a certain time period, like the fifteen-minute window currently used.

Apple is walking a fine line here as it must make sure that the platform is safe for parents and appeases the government while at the same time not jeopardizing in-app purchases as a source of revenue for itself and developers.