I love loved iTunes. I have been using it since my first iPod in 2004 and have been keeping iTunes regularly updated. I appreciate being able to buy songs at $1 a piece rather than having to buy whole albums for $17+ only to find myself listening to only 4 or 5 songs. After putting off the 7.6.1 upgrade until May because of school, I noticed there was bloatware included with this version of iTunes. Safari was bundled with 7.6.1.  It didn’t really bother me because there was an option to not install it. With the release of 7.7, however, I was shocked to find a reference to MobileMe in my control panel when I was setting up my audio configurations after upgrading audio drivers.

Where did this come from? Why is it here? Is this really Apple?!?! There was no mention of MobileMe anywhere during the updating process. When I went to Apple’s iTunes 7.7 website to make sure I didn’t overlook something, there’s nary a mention of MobileMe. I even read every last word of the end user license agreement. No mention of MobileMe. A few people, including John Lilly, CEO of Mozilla, have publicly criticized Apple for bundling new software into an updating program when Apple slyly attached Safari into the update. I am going to have to agree with Mr. Lilly here. This is malware no matter how great MobileMe might be (or could be, considering all of the trouble it has had during initial launch). I am still utterly amazedÃ¢â‚¬”not in a good wayÃ¢â‚¬”that Apple, of all companies, decided this is sound business practice.

iTunes was a stand-alone program that performed well, was easy to use, and served my needs without any excess bloat. I wish Apple would go back to pushing out that great product without any strings attached. I found iTunes. iTunes didn’t find me. With iTunes 7.7 and its included MobileMe however, I had no choice. A lot of folks sounded the slippery slope alarm when 7.6.1 came bundled with Safari, and unfortunately, it looks as if Apple has turned them all into prophetic geniuses all the while giving our computers a healthy dose of gas.

The worst part of the MobileMe forced installation is the uninstallation process. I thought I was in the clear when I uninstalled the new version of iTunes. Oh no, I wouldn’t get off that easy. I dug around the net yesterday to find an iphonealley.com story dealing with this exact issue. To completely uninstall MobileMe on my tablet running Vista Business and my desktop running XP Pro, I had to uninstall “Apple Mobile Device Support” as well. Since I was already there, I also deleted “Apple Software Update.” I simply got rid of 7.7 from my tablet and reverted back to 7.6.1 on my desktop. 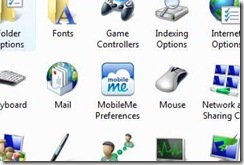 Has anyone else been bothered by this latest ploy by Apple? Am I being unreasonable to expect iTunes to be nothing more than the coordinating software between my iPod and my music collection? Has Apple poured more grease down the slippery slope? I really hope this isn’t the UN-BE-LIEVE-ABLE stuff we’re supposed to expect from Cupertino.