Following early speculative report that Apple may be the sole source for users to buy Dock Connector accessories for the next-generation iPhone 5, which has a re-designed 19-pin Dock Connector that’s much smaller than the ones currently available today, there are new reports that suggest that Apple’s Dock Connector Adapter to make current micro USB cables compatible with the new proprietary standard will be priced at $10 each or $29 for a pack of three, according to a report on iLounge. 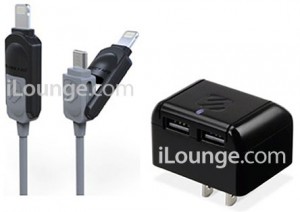 Industry insiders fear that Apple may restrict the Dock Connector standard and may not license out the standard much in the same way that the company has done for the MagSafe connector to charge the company’s MacBook, MacBook Pro, and MacBook Air laptop computers. In doing so, Apple would have a monopoly on the market and the company can generate as much as $100 million for every 10 million Dock Connector Adaptor it sells.

It’s unclear if Apple intends on opening up the ecosystem and licensing the standard to accessory-makers in the future. If the company doesn’t, popular iPhone accessory-maker Mophie, with its battery-integrated hard case for the iPhone, may be left out of the loop.

Even if Apple restricts the Adapters to convert existing cables to the new Dock Connector to itself, the company may likely license out the Dock Connector standard to makers of accessories. The success of the iPod and iPhone was helped also by the robust hardware ecosystem that surrounded those devices, including in the early days microphone accessories that connected to the Dock Connector of the iPod and later to speaker docks for the newer iPods and iPhone. More recently, blood pressure cuffs and new devices are able to tap into Apple’s ecosystem.