While we are preparing for an iPhone event on October 4th, Apple hasn’t shared much about what we can expect aside from a coy, “Let’s talk iPhone.” invite.

We have been expecting an official confirmation of the fall iPhone even for some time, and expect Tim Cook to announce a new iPhone and the iOS 5 release date. We have also heard rumors of a cheaper iPhone, one that might push Apple stock prices over $530, but according to another analyst Apple will focus on iOS 5.

Gene Munster, an analyst with Piper Jaffray, issued an investment note which predicts that Apple will focus on the iPhone 5 and iOS 5 with new voice control features. 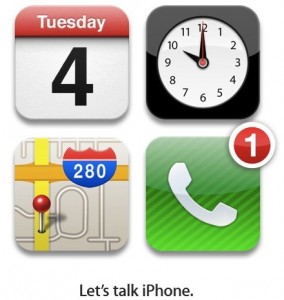 This contradicts other analysts and Al Gore’s promise of “iPhones,” but isn’t out of the question. The iPhone 4S is reportedly a new iPhone, which costs less to make than the iPhone 4, but will look similar to the device. An iPhone 4S would reportedly be sold for $300 to $350, which would allow Apple to enter the pre-paid cell phone market and mid range smartphone market.

The iPhone 4S might make an appearance as a cheaper iPhone on carriers like Verizon, Sprint and AT&T, or it could even appear on a carrier like Virgin Mobile, which is owned by Sprint and uses the Sprint networks.

Munster’s analysis may be spot on despite the contradicting reports. Apple’s coy, “Let’s talk iPhone.” invitation likely points to a heavy focus on the new iOS 5 voice control. The iOS 5 voice control comes from the acquisition of Siri and a partnership with Nuance. This new feature reportedly allows you to speak in plain english and your iPhone will respond with the appropriate action. This may be called Assistant and could be an iPhone 5 exclusive due to the increased RAM needed to make the system work flawlessly.

Apple typically delivers the best iOS experience on new devices, with older devices picking up parts of the update. With iOS 5, it looks like Voice Control will be the iPhone 5 exclusive.

Instead of spending the time to create a new piece of hardware with similar specs and a similar look, Apple might choose to make an iOS 5 powered iPhone 4 the new affordable Apple device. After Apple announcements, the past iPhone devices typically take a price cut, but production isn’t completely shut down. It’s possible that Apple will work on behind the scenes parts changes to bring the price down and count on the many new iOS 5 features to meet demand for a pre-paid or cheaper iPhone.

The video above shows off a collection of iOS 5 features which will come to current iPhones and iPads. This is a major update that could breath new life into older devices. It wouldn’t be surprising to see Apple use this update to move even more iPhone 4 devices. We may even see Facebook Integration in IOS 5.

For more on iOS 5, check out the iOS 5 Top Ten Features and videos, and learn how this will change the way you use your iPhone. iOS 5 addresses many of the complaints that users have, and it will be available as a free update to iPhone 4, iPhone 3GS, iPod Touch and iPad owners. This is welcome news for the many iPhone owners who are stuck in a contract and cannot update to an iPhone 5 on launch day.

Tim Cook is expected to announce the iPhone 5 and iOS 5 on October 4th at Apple’s headquarters. This is his first announcement as CEO aft Steve Jobs resigned, which will bring many eyes to the event. We expect that Apple will share an iOS 5 release date of October 10th or 12th and an iPhone 5 release date of October 14th. If you are interested in selling your iPhone ahead of the launch, you can lock in a $250 trade in value form Netflix and send your phone in after it launches.