It’s no secret that Apple likes to take shots at its competitors when announcing new products and today’s iPhone 4S announcement was no different with Verizon’s latest and greatest Android handset, the Motorola Droid Bionic, sitting squarely in Apple’s cross hairs. While talking about the iPhone 4S’ upgraded 8MP camera and its features, Apple’s Phil Schiller delved into the competition’s camera options.

As you can see, the Motorola Droid Bionic is in last place and is listed amongst the HTC Sensation and the Samsung Galaxy S II, two other major Android phones. Schiller wasn’t done though. 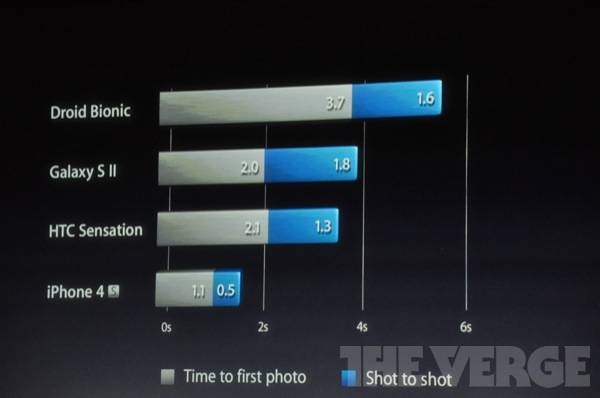 He decided to take a full on shot at the Droid Bionic saying:

I don’t know what Droid Bionic customers have to do between taking pictures… like, go get coffee.

Oddly Schiller left out the slide comparing the iPhone 4S’ network speeds against the 4G LTE speeds that the Droid Bionic offers. Still, this hopefully will serve as a catalyst for Motorola to get their act together in the camera department.