Call me tired, call me bored, or just call me. But I think Apple did its usual fall announcement focused on music and Christmas sales today and did it well. That said, there were no real surprises, but this is all about pushing dollars through the cash registers this fall into December, and I think Apple proved, again, it is a master at doing so.

No surprise that Apple led off the event with pictures of some of its new stores in far flung places. The architecture is gorgeous, but the subtext to all those who keep trying to trying to mimic Apple’s success is, unless you can do this, you can only try to compete. Apple owns the retail market when it comes to consumer shopping for the kind of gadgets it sells. So, on to those gadgets.

Apple reinvigorated its iPod line, making the iPod Shuffle smaller still and squashing the iPod Nano into a small square that now features a tiny multi-touch screen. It’s wearable, just like the Shuffle. The iPod Touch got the long expected dual camera routine, and of course FaceTime is hyped big time. You can do some face time between iPod Touches and iPhones. The iPod Touch also gets the Retina Display. It’s running the same A4 processor as the iPhone 4 and priced between $229 and $399 depending on the storage.

Apple announced that iOS 4.1 will be available next week for all but the iPad. The iPad will see iOS 4.2 in November which is disappointing. The big features trumpeted in 4.1 are HDR photos, which is a way of bracketing a picture with different exposures for a supposedly better result, and Game Center, which will let you connect up your game playing with others. Apple continues to push gaming on the iPod Touch in a big way and this appears to be paying off.

The iOS 4.2 promises to add the features of iOS 4.1 (and earlier) as well as wireless printing from the iPad and also something called Air Play. Essentially Air Play allows you to share media (music, photos, videos). This was formally a feature known as Air Tunes, but the addition of photos and videos heralds the other product Apple updated today and that’s Apple TV 2.0.

Jobs as always called this a hobby and I guess he’s ready to go for it beyond that stage. The box is redesigned and allows streaming via WiFi as well as an ethernet connection. The box is tiny (about 1/4 of the size of it’s predecessor) and to fill it up with content you rely on streaming. Apple says that customers don’t want storage hassles, so its moving to a rental policy. TV shows (initially Fox and ABC) for $.99 and first run movies available on the same day as the DVD release for $4.99. The box will set you back $99.

Of course to tie it all together in a pretty holiday bow, Apple announced a new version of iTunes and as predicted it now has a range of social features. You can follow friends, music stars, and the like, and share info back and forth. I sure hope they did some work on the iTunes architecture because it is clunky enough without adding too much more to it that could slow it down. In any regard, Apple calls this social addition, Ping. Which I’m guessing is going to infuriate a lot of folks who don’t like Apple and use the jargon, “ping me” in a variety of ways.

It’s all entertainment, all the time, movies, music, photos, you name, and Apple continues to dominate, but as I said at the beginning, they can dominate so handily because of that retail experience and while the geeks may or may not be impressed, I look for the consumers to be come holiday shopping season.

Side Note: I watched most of the event via Apple’s streaming media using the iPad. It worked reasonably well. Supposedly this was a test to check out the load on Apple’s new server farm. Translated that means Apple is slowly taking steps towards doing even more streaming than was announced. The stream was pretty good, stuttered several times (this seemed somewhat universal as I would see folks experiencing a similar thing via Twitter) but all in all was basically a good experience. I also gave it a try on the iPhone 4 and it seemed to work well there as well, although I experienced more interruptions that threw me back to the start of the broadcast. 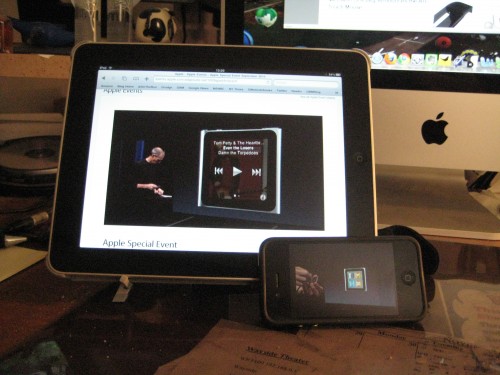