The MacPad:How Apple Could Make a Real Netbook Killer

Steve Jobs has repeatedly said that Apple will not produce a netbook, but Apple could really shake up the market if it were to introduce something similar to the Lenovo U1 Hybrid/LePad. The Lenovo device, which may never actually come to the U.S., is a great concept. The tablet portion is geared for consuming media via a touch interface, while the base station has enough horsepower to run Windows 7.

Apple’s holding a Mac event this Wednesday and there are rumors that Apple will be reincarnating the MacBook  Air as an 11.6 incher. Making a device that’s even more portable than the MacBook Air would be a good move for Apple. But Apple could really shake up the marketplace if it simply took a page out of Lenovo’s playbook and created a system similar to to Lenovo’s U1 Hybrid/LePad. 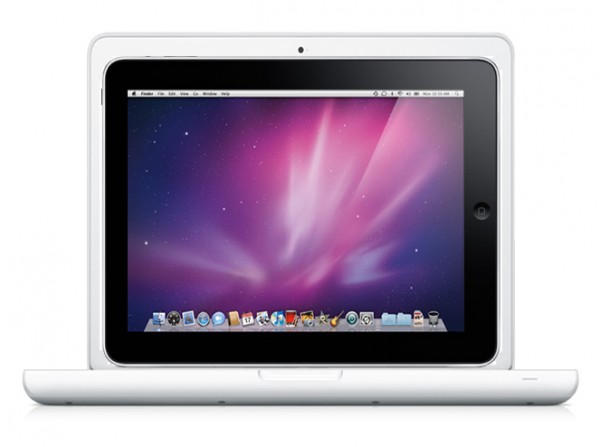 Apple could probably sell millions of iPad docking stations. They base portion of the MacPad would consist of a keyboard, battery and all the guts necessary to run OSX. Think of it as a miniature, headless MacBook. It could be sold on its own and buyers would have to bring their own iPads.

One of the most expensive and energy hungry components of a portable computers is the display. When unplugged from a power outlet, the processor, drive and other internal components would draw power form the battery in the bottom of the machine, while the iPad would draw on its own internal battery. It’d be realistic to see 12 or more hours of battery life out of a system like this. Want to really stretch the battery life to something like 20 hours? Simply switch over to the iPad’s operating system while docked and use the docking station’s battery and keyboard.

When Steve Jobs introduced the MacBook Air, he explained that Apple would not sell laptops with tiny keyboards or any of the other compromises commonly found on netbooks. While the iPad’s display would be on the small side, the bezel and the necessary shell that would hold it in place would add enough real estate to hide a keyboard larger than those found on 10″ netbooks.

Another thing Jobs mentioned was that he didn’t want to sell an ultraportable with crappy graphics or a processor that couldn’t run real apps. Apple could simply borrow most of the guts from its 13″ MacBook. A decent Core 2 Duo processor, 2GB of RAM and a 2.5″ hard drive. OSX could tap into the iPad’s 3G signal if present.

Apple sells its MacBook for $999, but if it dumped the display and optical drive it might get the price of the MacPad down to about $700. That might sound expensive, but Apple and its customers do an unbelievable job of justifying high prices. Some would look at the MacPad as saving them from having to buy a smaller MacBook, such as a MacBook Air. Others would look at it as only costing a little more than buying a netbook. A lot of Apple fans would snatch up a MacPad docking station without thinking too much about value.