After weeks of waiting Apple is finally shipping Lighting to Dock Connector adapters to users who ordered them.

Apple sells two different adapters, The first is a $29 adapter that looks like the iPad Camera Connection Kit with a 30-pin input on one end and a Lightning connector on the other. The second is a $39 0.2 meter cable that connects to the end of a 30-pin dock connector cable and turns it into a Lightning cable. 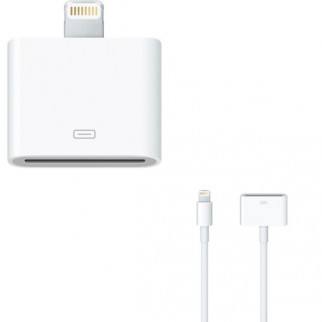 Now that Apple is shipping the adapters to some users we might start to see them in stores sometime. Apple is taking its time stocking Lightning accessories in stores, most stores didn’t have Lightning cables until a few days after the iPhone 5 launched. Hopefully we won’t have to wait much longer for these adapters to make it to stores.

Right now Apple is the only company that can make Lightning cables and adapters, That’s because the connector has an authenticator chip inside it, which lets Apple control who can and can’t access the port. The latest rumors say Apple will hold a seminar in November for accessory makers where it go over the changes to Made For iPhone and the Lightning cable.

Until Apple approves third-party manufacturers it is the only maker of Lightning accessories so it can take the time to build up stock of these adapters before anyone else can get in the market.