Apple Stores will soon be transitioning the first-generation iPhone to obsolete status, officially ending the run of a smartphone that has come symbolize a new approach to mobile computing for the company.

Documents leaked to 9to5Mac indicate that the change status will occur on June 11. On that date, the original iPhone will be classified as a “vintage” product in the United States but “obsolete” internationally.

Apple support documents maintain that vintage products are “Those that were discounted more than five and less years ago.” Vintage products can still be serviced within the state of California by the Apple Store or an authorized Apple dealer. As a whole Apple will discontinue servicing the hardware in other locations around the United States and around the world. In short, unless a user resides in California, their original iPhone will no longer receive any hardware support from Apple. 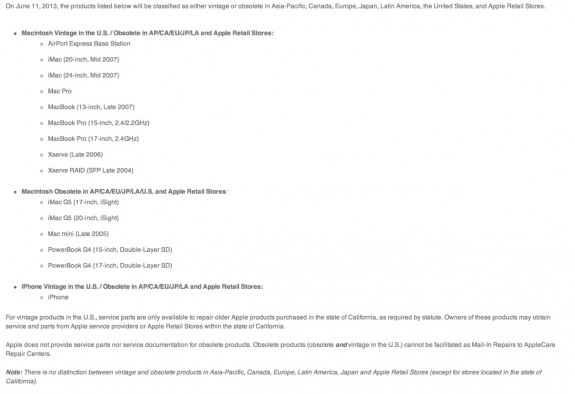 It should be noted that the company had already discontinued updating the software on first-generation iPhone after updating users to iOS 3.1.3 in 2009. That update brought universal search, updated the YouTube application and introduced copy and paste to users.

Read: iOS and iPhone Timeline: From iPhone to iOS 5 in 5 Years

The change in status comes six years after Apple first announced the iPhone in an event led by then Chief Executive Office, Steve Jobs. At the time, Apple marketed the device as being first and foremost a “revolutionary telephone, a widescreen iPod with touch controls, and break through internet communicator.” The original iPhone OS was designed to only use the applications that Apple had preinstalled, and did not yet allow users to install applications from the iTunes App Store. That feature wouldn’t come for another year when Apple released iOS 2.0 to users in 2008.

While users will no longer be able to send their first-generation iPhone to Apple to have it serviced, they can still acquire parts via other means and fix the device themselves. IFixIt allows users to order individual components belonging to each generation of the iPhone and provides tutorials on how to install them without a user damaging their device.

For example, ordering a new logic board for the first-generation iPhone would cost a user $199.94.