Apple manufacturing partner Foxconn, also known by its corporate Hon Hai Precision Industry name, has begun a massive hiring campaign in China. Given that the hiring comes ahead of Apple’s highly anticipated iPhone 5S and budget iPhone debuts this fall, it’s being speculated that Foxconn’s hiring spree would be to accommodate Apple’s manufacturing demands.

According to CNET, Chinese language publication China Business News reports that the hiring is being done by a recruitment company that works with Foxconn at the  Zhengzhou, Henan Province plant. The report specifically mentions the “iPhone 6” moniker, but it is believed that Apple will release an iPhone 5S, not a radically redesigned iPhone 6, during this year’s annual refresh of the flagship smartphone model. 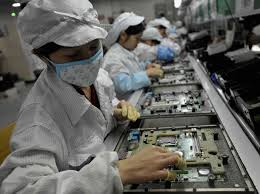 Currently, Hon Hai only employs around 210,000 employees at its plant, which is down from the 300,000 peak in 2012. Still, with a peak of 300,000 employees, when the iPhone 5 first launched globally, demand far exceeded supply and customers eager to get their hands on the redesigned iPhone, coming from the iPhone 4 or iPhone 4S generations, saw lengthy wait times.

The publication is giving wild speculations about the design of the iPhone 5S, or iPhone 6 as was referred to in that article. Some of those guesses include a carbon fiber body, borderless glass display, and a reduction in weight by as much as 40 percent from the current iPhone 5.

At this time, however, the iPhone 5S is widely believed to be similar in design to the iPhone 5 and the new model won’t take a radical design departure from the existing flagship. This year, the biggest changes that Apple will be introducing will be from the software side with iOS 7, which eschews the old skeuomorphic design in favor of a more simple, minimalist approach to iconography designs.