With curved displays now a premium part of the smartphone experience that Samsung and LG are experimenting with, Apple is not one to be left out of the party and a potential patent application may hint that the iPhone 6 may arrive with a curved display. Apple had filed for a patent with the U.S. Patent and Trademark Office describing a means to manufacture a curved touch display to “produce accurate, curved touch surfaces without deficiencies caused by substrate warping or deformation.”

According to Apple Insider, the patent could be applied for displays, touchpads, touch mice, and other devices, meaning that we could potentially see an iPhone, iPad, Magic Mouse, or Magic Trackpad with a curved surface in the future. However, just because Apple files a patent for something doesn’t mean that the Cupertino, California iOS- and OS X-maker will commercialize the product(s) and bring them to market.

To avoid deformation due to the annealing process, the patent proposes a technique that deposits a conductive thin film over a flexible substrate while it is in a flat state. Once the electrodes are in place, the substrate package is joined to a curved “forming substrate” and subsequently heated. The process results in a non-deformed curved touch sensor stackup with a thin film that benefits from the high-temperature anneal.

This latest patent follows another Apple patent that allows Apple to mold and bend curved glass without the use of harmful chemicals.

Rival Samsung had recently launched the Galaxy Round phone and LG had released the LG G Flex, both of which feature a curved flexible display, but one that is not malleable and is fixed in its curvature. Other manufacturers, including Nokia, had used a curved glass surface as a better way for users to interact with the platform’s UI for ease of swiping. 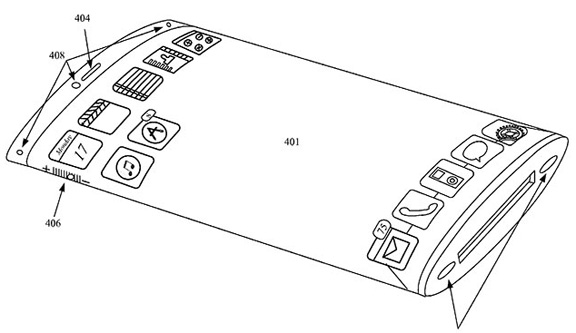 Will Apple bring this rendering concept to life?

With Apple rumored to create an even larger smartphone display for the anticipated iPhone 6 for late next year, it’s unclear if the company’s plans will include a curved phone display. If it does, Apple may know one way to make it given its most recent patents for the technology.