Apple Patent Hints at More Multi-Touch on the Way

I don’t think there is any suprise about this at all. New patent applications from Apple are hinting that Apple is working hard to bring multi-touch to its MacBook line. After the recent introduction of the MacBook Air with its multi-touch trackpad anyone paying any attention at all has already surmised that we would probably be seeing this in the MacBook line at some point in the future. I’m going to again point to Rob’s Twittering this weekend from an Apple Store where he reported that working with the MacBook Air’s multi-touch keyboard was more intuitive than he had imagined it would be. 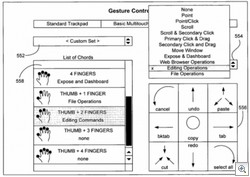 Pure speculation here on my part, but if Apple is investing heavily in multi-touch on the trackpad, I wonder what that might mean for onscreen multi-touch on larger devices than the iPhone or the iPod Touch? Maybe Steve Jobs just doesn’t like those greasy fingerprints on his screen.