Apple already includes its Thunderbolt port, created as a collaboration with Intel, on its MacBook and iMac, but the standard may also be going mobile as well. The iOS-maker has recently filed for patents to use Thunderbolt on mobile devices, including the iPad, iPhone, and iPod Touch. At the very least, Thunderbolt would be able to provide iPad, iPhone, and iPod Touch owners the ability to rapidly transfer data and quickly recharge their devices.

As users download, create, and consume more HD content and capture more high resolution images, Thunderbolt can help users synchronize their iDevices with their Macs and make synchronization and backups as painless as possible. One of the biggest complaints with the iTunes methods of keeping devices in-sync is that the process is time consuming and slow. 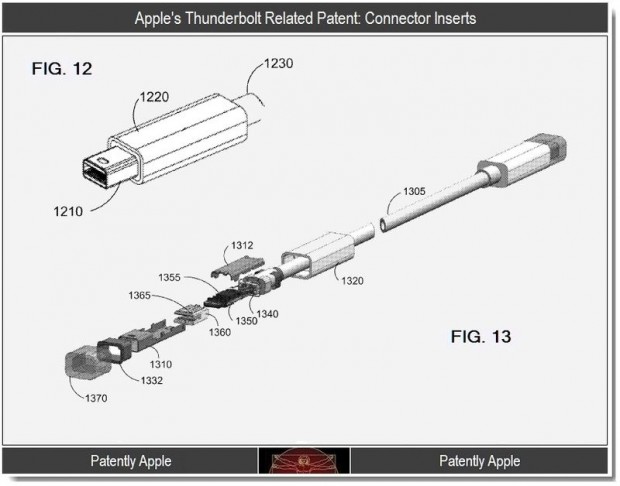 At its core, Thunderbolt provides two-channel communications between devices, like USB cables, and can deliver speeds up to twenty times faster than USB 2.0 connectivity. In addition to input/output devices being able to connect to Thunderbolt ports, users of Apple’s Mac products can also connect external displays to the port.

It’s unclear if on the iPhone, iPad, and iPod Touch Thunderbolt will act as a host or will provide an alternative for faster charging and data transfers on mobile devices.

Potential uses for Thunderbolt on iOS-device include transforming your tablet’s display into a second screen with minimal to no lag time when connected to a MacBook Pro or Air, for example, or utilizing the reverse and having the MacBook’s screen as a secondary display for your iPad.

As Apple has so far insisted on a closed, controlled ecosystem for iOS, it’s unlikely that users would be able to connect their mobile devices to a Thunderbolt-capable external hard drive for more storage.

Whatever the case may be, for the technology to work, Patently Apple has uncovered that a new cabling system would need to be made for the “connector to be flat enough to fit a USB-type of device slot.”

Thunderbolt connectivity was rumored for the iPad 2 before that tablet was announced in the past. It’s unlikely we’ll see it in time for the iPad 3, but there’s a slim possibility that the technology can be available this Fall for the iPhone 5’s announcement.