Patently Apple has dug up a new Apple patent (*shocker*) for a capacitive stylus that uses a ball and disc system to establish a contact point with adequate surface area for a capacitive touchscreen to detect that will remain flush with the screen when used at an angle. Smart design, but still just another capacitive stylus, except for potential added functionality.

PA reports that the pen could feature sensors and triggers for added functionality:

In some embodiments, the stylus could include one or more embedded accelerometers adapted to transmit positional information to the touch sensor panel.

[…] In some embodiments, stylus functionality may also include sensory modules including motion or pressure sensors and other similar devices. In certain embodiments, the stylus could include one or more squeeze (force) sensors, switches, buttons and/or other toggles adapted to allow a user to quickly select among various types of associated functionality (for example, selecting colors, brush sizes, shading, line width, eraser functionality, etc.). 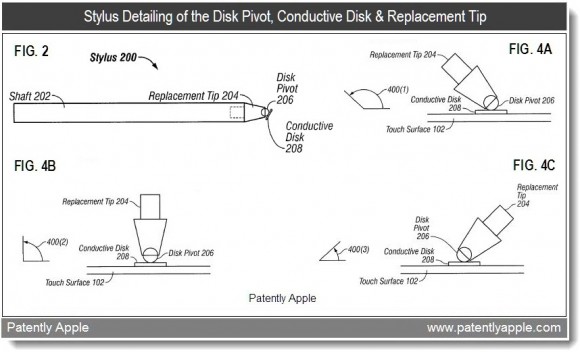 Wacom and N-Trig pens already offer features like pressure sensitivity and buttons for commands such as right-click and erase. But those already actively send data to the digitizer in the display for positioning. I’ve never heard of a capacitive stylus offering such functionality.

Presumably such a pen would require a power source, such as a built-in Li-Ion battery, but the patent includes an alternative design which would use a cable to supply power. As far as transmitting sensor data from the pen to the device, one option is Bluetooth, but I wonder if it would be possible to do so through the capacitive sensors while the pen is in contact with the screen.

Regardless of how it’s done, if Apple can build and sell a pen with pressure sensitivity that can be detected as a pen, not just a finger substitute, it would bring capacitive touch a lot closer to the functionality of an active digitizer. Would still lack hover detection, but that’s almost entirely irrelevant for a cursor-less system like iOS anyway.