Apple may be adding the magsafe connection, found on Apple notebooks, to the iPad in future versions. Patents found by Patently Apple revealed this news and a patent win for touch sensitive technology that helped set the iPhone and iPad apart from the rest of the pack.

Apple routinely files patents in order to protect innovations, an increasingly important task these days, but that doesn’t mean the iPhone 5 will have this new touch screen technology or that the iPad 3 will have a mag safe connector. 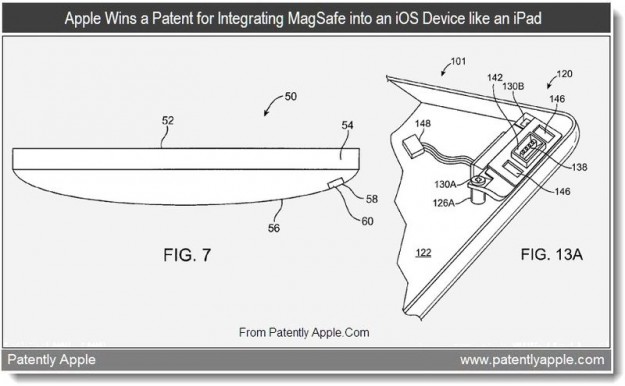 The iPad 3 Could have a Magsafe Connection.

While the multitouch touchscreen patent is already in devices on the market, the iPad magsafe connection is something we can definitely hope for.

If you’ve had to try to find the dock connection on the iPad 2 in the dark, you’d love the ability to just get the port and the cord near each other and hear them snap together to charge.

Traditionally the magsafe connection only provides power to Apple notebooks. If the iPad does get a magsafe connection, I would be very surprised if it didn’t pull double duty to charge and sync the device. While iOS 5 allows you to use your iPhone and iPad without connecting to the computer, there are still times when a traditional connection will be much appreciated.

Personally I’d rather see the iPad 3 come with built-in qi wireless charging, so that I can just set it on a mat on my nightstand to recharge. If Apple added a standard like this to the mobile lineup, it would create a surge in the number of qi accessories, hopefully building a better market overall for wireless charging accessories.