Today Apple released an update to its Podcasts app for iPhone and iPad that fixes a number of issues and gets rid of some of the skeuomorphic design.

Podcasts 1.2 fixes a number of issues relating to playlists and iCloud support. Playlists synced from iTunes will now appear in the app, and users can now create On-The-Go playlists within the app full of episodes from their favorite podcasts.

The new version of the app also lets users create their own custom stations of their favorite podcasts that will automatically update with new episodes. Those custom stations will sync across devices, so users can create a station on their iPhone then listen to or watch episodes on their iPad. 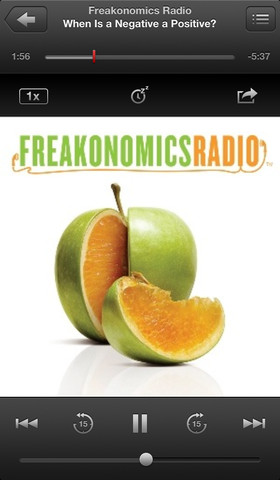 Perhaps the most interesting update to the app, however, is the new Now Playing screen. The screen now has easier to use controls with a layout that requires fewer taps to access the timeline and speed controls of an audio podcast. The screen does this by getting rid of the old-school tape recorder design the app used to have.

The new screen looks much more like the Now Playing screen in the Music app.

The change could mean iOS will soon move away from the skeuomorphism that defined it for some time now. Skeuomorphic designs try to make digital apps looks like their analog counterparts. The bookshelf and pages of iBooks are perfect examples of the design as are the Notes, Calendar and Newsstand apps in iOS.

If Podcasts is a sign of things to come, iOS 7 will move away from skeuomorphic design. The change is likely because Jonathan Ive, the man behind the design of Apple’s hardware, is now in charge of software. Ive took over as head of “Human Interface” design when Scott Forstall stepped down from his position as senior vice president of iOS software last year.

Under Ive’s guidance there’s a chance iOS 7 will look much different from iOS 6. If nothing else, there’s a good chance iOS 7 won’t try to emulate the design of analog things like books and notepads.