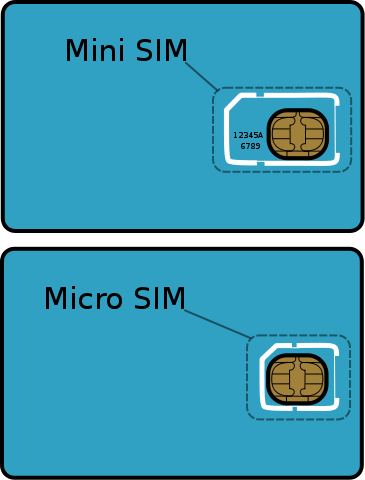 Apple wants to take the SIM cards used in GSM phones even smaller. The iPhone-maker has proposed the smaller format to the European telecoms standards body and French carrier Orange is behind the proposition to reduce the size of the SIM card, which could help Apple create thinner, smaller, or sleeker products in the future. Orange is supporting Apple’s decision to go through a standards body to introduce a new standard, which would could potentially affect the industry.

The SIM cards have long been promoted as a feature on GSM phones for the convenience of storing numbers on the card’s limited memory, as well as the ease in swapping the card into a new phone when a user upgrades to connect the new device to the existing service. When Apple had introduced the microSIM format on the initial iPad 3G and the iPhone 4, there was a lot of coverage about the new standard since many people were concerned that they wouldn’t be able to easily switch devices. Since then, a number of techniques have emerged to teach users to trim a regular SIM card down to a microSIM size or to use an adapter to take the microSIM to regular SIM size if a user were to migrate to or from a regular smartphone to an iPhone, for instance.

However, the method of trimming a regular SIM to a SIM card even smaller than a microSIM may further reduce compatibility with existing devices and could have industry-wide implications. The way that users were able to trim an existing SIM card to a microSIM size is because the gold contacts were essentially in the same location and are about the same size between the larger and smaller cards; however having an even smaller card would mean that the gold contacts on the card may need to be shrunk to accommodate the smaller space, potentially reducing the chances that a user can merely trim their microSIM or SIM card to fit an even smaller SIM standard proposed by Apple. This could affect the ease in which users on the GSM standard can upgrade devices by merely swapping a SIM.

Orange speculates that new iPhones may begin to emerge beginning next year to support the new SIM standard that Apple is proposing right now.

It should be noted that the official moniker associated with the current size SIM cards found on many phones and smartphones, including Android phones, is the mini SIM standard; Apple currently uses the microSIM standard on its current-generation iOS devices.