Apple has never taken kindly to iPhone jailbreaking, so it should come as no surprise that they quickly pulled an app that misled users into thinking they were purchasing the ability to jailbreak their iPhone 4S and iPad 2.

The Jailbreak app by RiliSoft was a cleverly crafted $9.99 app that had a crafty screenshot and description that could easily fool the average user. After @Blogsdna highlighted the app on Twitter this past week, Apple took notice and has since removed Jailbreak from the app store.

The app is actually a game with 35 reviews, but Apple does not like developers to play games with apps, especially if it includes jailbreaking. You can see the description in a cached copy of the page or in the image below. Notice how the actual game elements are hidden when you first look at the app. 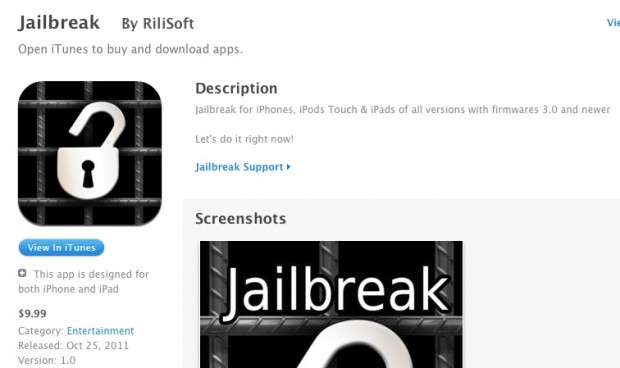 Apple pulled this fake jailbreak app from the app store.

The trickery is even worse on the iPhone, where the app claims to support an iPhone 4S jailbreak and an iPad 2 jailbreak. You can see this in the screenshot @Blogsdna posted on twitter. 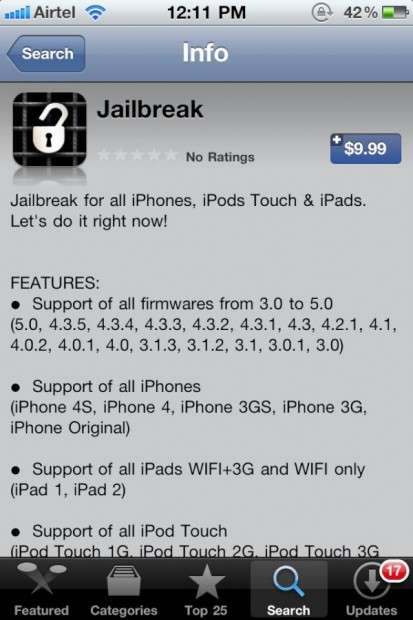 Sadly, this isn’t the first time we have seen a company try to trick users into paying for an iPhone 4S jailbreak. Last week we highlighted a website that claimed to be able to jailbreak your new iPhone for $20. Ignoring the fact that there is no iPhone 4S jailbreak available to the public, and that jailbreaks are free.

Right now there is an iPhone 4S jailbreak, but it is not ready for the public. The big names in the jailbreak community are not saying when we can expect an iPhone 4S and iPad 2 jailbreak, but at least we know progress is being made. There is a jailbreak for the iPhone 4, iPad and older iOS devices.