Wall Street is reacting negatively to the sales numbers, driving AAPL stock down dramatically in after hours trading.

Apple does not break out iPhone sales by model, so it’s not clear how many iPhone 5 devices the company sold, versus the cheaper iPhone 4S and iPhone 4. The number still marks an increase of Q1 2012 when Apple sold only 37 million iPhones. The increase is more dramatic compared to Q4 2012, which saw iPhone sales of just 26.9 million thanks to consumers waiting for the iPhone 5 release and for enough stock to return.

Comparatively, Samsung has sold 40 million Galaxy S3 smartphones since the phone launched last May. It is worth noting that Samsung’s Galaxy S sales including all Galaxy S smartphones recently topped over 100 million. 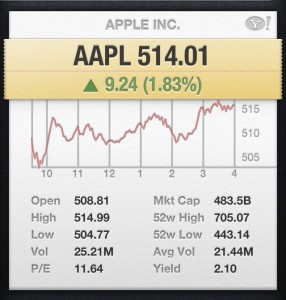 AAPL stock closed high, but is down in after hours trading.

While there are rumors of an iPad 5 release in March 2013, Apple may see these numbers as a reason to keep the iPad 5 and iPad mini 2 releases lined up with the holiday shopping.

Apple also reports increased iPod sales, most likely thanks to the new iPod touch with a better camera, 4-inch display and improved features as well as the new iPod Nano with a touch screen. Apple sold 12.6 million iPods in Q1 2013, more than doubling the previous quarter. iPod sales year over year are down, possible as younger iPod owners are now getting iPhones instead of iPods.

Sales of Apple’s Mac computer line including the iMac, MacBook Air and MacBook Pro with Retina Display are down in Q1 2013 from Q4 2012 and compared to Q1 last year.

iTunes and iPhone accessory revenues are up slightly compared to last quarter and Q1 2012.