iPhone Sales Down 26% as Consumers Wait for iPhone 5

Apple beat the low expectations for Q3 2012 earnings, announcing that the company sold 26 million iPhones in the last quarter, though the earnings came in short with $35 billion in revenue.

iPhone sales are down 26% over the last quarter, but iPad sales are up 44% and sales of Apple’s portable computers are up 7%.

Apple Inc, (AAPL) stock was down slightly in after hours trading on the news of a conservative quarter.

While the numbers are not as exciting as the 35 million iPhones sold in Q2 2013, analysts and investors seem to have built these numbers into the pricing of Apple stock. 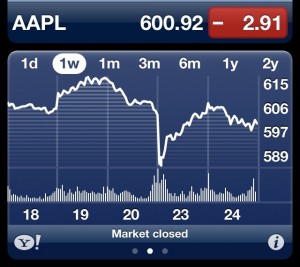 AAPL is down in after hours trading.

iPhone sales are down 26% over the last quarter as consumers wait for the rumored iPhone 5 release date this fall. Apple has not commented about the sixth generation iPhone, which industry insiders believe will include a 4-inch display and 4G LTE connectivity. Multiple industry analysts believe Apple will release the iPhone 5 in September or October.

Even as consumers choose to wait for the iPhone 5 Apple the 25 million iPhone sales is an increase of 28% over the same quarter in 2011, when consumers were also waiting for a new iPhone. Consumer surveys show an unprecedented demand for the iPhone 5, likely attributed to the lack of physical upgrade during the iPhone  launch last year.

iPad sales are up as consumers pick up the new iPad with Retina Display and the discounted iPad 2. Apple sold  17 million iPads in Q3 2012, which is an impressive 84% increase in iPad sales in Q3 of last year. This is likely attributable to additional enterprise adoption, educational sales and a increased use by consumers who see a place for a tablet in their connected life.

Rumors of an iPad Mini and the competition from the Nexus 7 and other Android tablets does not appear to have slowed sales of the iPad during Q3, but could be an issue in Q4 2012.

Apple also reported $891 million in revenue from software sales, including revenue from sales of third-party apps in the iPhone, iPad and Mac App stores.

The iPod line delivered an unsurprising 12% decline in units sold and a 20% drop in revenue compared to the year-ago-quarter.