Those hoping to use Apple’s FaceTime service over 3G may be able to one day in the near future as it seems that Apple is now testing the service.

iDevice, a Romanian blog, has released a screenshot of what appears to be a FaceTime error message.

That message, which appears in iOS 5.1.1, apparently comes after switching off 3G service.

The message seems to show that Apple is testing FaceTime over 3G or even gearing up for a release sometime in the not-so-distant future. 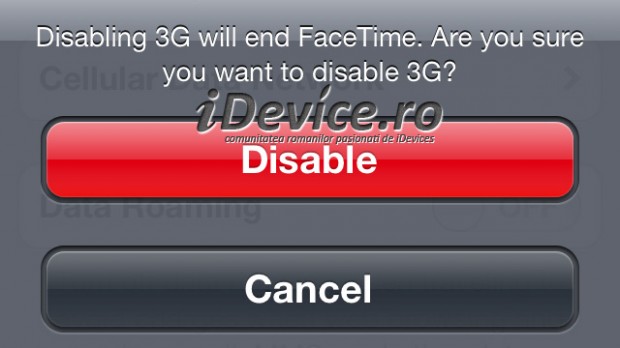 Disabling 3G will end FaceTime. Are you sure you want to disable 3G?

It then gives users the option to disable or to cancel and keep 3G on to keep FaceTime running over 3G.

With Apple gearing up to announce iOS 6 at this year’s WWDC in San Francisco, it’s certainly possible that this might be one of the features included in the new mobile software. It’s a feature that FaceTime users have campaigned for for quite some time and Apple tends to like to please its customers.

As it stands, Apple is behind the curve when it comes to video chatting. Popular video chat services like Skype and Google Hangouts already allow smartphone users to chat with friends and family members over 3G networks.

Read: How To Join a Google+ Hangout From the iPad.

But, as Gizmodo points out, even if Apple were to release the feature, there is a chance that carriers would not allow the service to work over their networks.

Not much is known about iOS 6 at this point. One rumored feature is said to be a new in-house map service that might replace Google Maps which is currently the stock maps service on Apple’s mobile devices.