In perhaps the biggest shift of its iTunes business strategy, Apple is reported to be in negotiations with record labels to launch a music streaming service as part of its iTunes platform. The service is said to be focused on the mobile platform–which includes the iPod Touch, iPhone, and iPad–as well as the desktop as Apple builds its own OS X operating system for its Mac business. What’s clearly shunned, as is part of Apple-built services like FaceTime video chatting, is Android as Google’s mobile platform won’t be able to tap into the streaming service.

The Wall Street Journal (subscription required) is reporting that the streaming service would be similar to that offered by Pandora, though the New York Times is unable to confirm through its sources if Apple’s streaming service would be free, a freemium service, or a paid service. Likely, Apple may generate additional revenues by selling ads through the service in a similar strategy to Pandora. Those ads would be delivered through Apple’s iAd service. 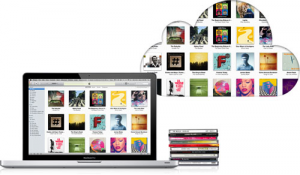 An iTunes streaming service has been rumored for a long time. In the past, however, those rumors had resulted in the iTunes Music Match service, which allows users to bring their own music and store it in Apple’s cloud for an annual fee. Users can then re-download the songs on devices that they own that are tied to their iTunes account. This latest report would suggest Apple is ready to enter the streaming music business that’s been dominated by iHeartRadio, Pandora, Spotify, and others.

Like other popular streaming clients out there–many of which are available to Apple’s iOS platform–the new iTunes streaming service would allow users to create stations with their personal tastes, based on artist, favorite song, genre, or other information. Apple is said to be going a step further by allowing users more flexibility in the number of times a song can be replayed in an hour.

“But while most such services operate under limited licenses that restrict what they can do with the music — for example, limiting the number of times songs by particular artist can be played within an hour — Apple is seeking direct licenses with record labels that would give the company more flexibility in using music, according to the people briefed on its plans,” the New York Times published.

Apple’s current music strategy is to allow users to either bring their own content and upload them to the cloud through iTunes Music Match or allow users to purchase songs either as albums or a la carte. The company’s music store on iTunes leads the industry in terms of digital sales.

However, given the proliferation of wireless-enabled devices, either with WiFi, 3G, or 4G radios, streaming may make better sense to many users who want to discover new music rather than owning songs flat out.

While Apple is scheduled to have a media event on Wednesday, September 12, to introduce the iPhone 5, the music service may not debut at the same music-oriented event that will see iPod refreshes as well. According to both news publications, negotiations are ongoing and it may take a while before things pan out.