After having shunned Google Maps in favor of its own in-house Maps experience with iOS 6, users were first impressed with some of the glitzy features that Apple introduced but later found that the app is not quite as accurate as Google Maps, the native solution on the iPhone since 2007 when the first model was introduced. According to a TechCrunch report, Apple is now recruiting former Google Maps employees to help revamp its new Maps app experience. 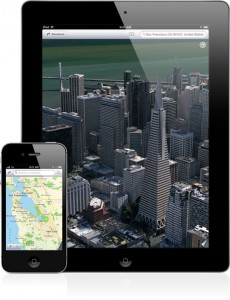 Many of my coworkers at Google Maps eventually left when their contracts ended or on their own accord. One guy looked around for other GIS work and ended up at Apple when a recruiter contacted him. He had heard rumors for a while that Apple was going to develop its own in-house mapping platform, and given his experience at Google, he was an easy hire. Apple went out of their way to bring him down to Cupertino and he’s now paid hansomly as a GIS Analyst. Another coworker that was a project lead at Google Maps, left for the East Coast after his contract ended, and was recently contacted by an Apple recruiter. The position sounds like a product development manager position, and will pay him $85k+ and all the moving expenses from the East Coast. He’s gone through 2 rounds of interview and seems like a frontrunner to land that position.

Since iOS 6 had debuted for public download, Apple had apologized for the Maps experience and states that the company is still in its early stages of building the mapping and location experience for iPhone owners. Apple promises that more will be done over time and it looks like the company intends on making good on that promise by hiring Google Maps engineers who are no longer employed by Google to help Apple on its own efforts.

It’s also been rumored that Google has submitted its own third-party Google Maps app to the iOS App Store, but that rumor was debunked. Also gone from iOS 6 is a native pre-loaded YouTube app, for which Google did submit and release its own YouTube app as a free download on the App Store.