Just as its competitors HTC and Samsung are showcasing new camera experiences with the respective One and Galaxy S4 smartphones, Apple is reminding users that its iPhone is used to capture more photos each day than any other camera. Since the iPhone originally debuted in 2007, Apple has shown that picture capture on a mobile device is easy and can be done with good quality, and the company has worked to increase the camera and experience with successive iPhone releases. 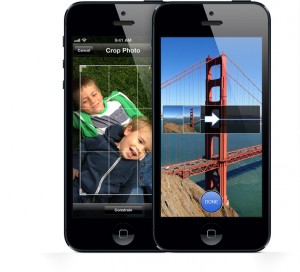 With the iPhone 5, Apple has introduced a new camera design along with a more scratch-resistant sapphire glass lens. The 8-megapixel iSight camera is capable of capturing panoramic photos, 1080p HD video, and HDR images. Users can also perform simple edits, such as cropping, rotation, and removing of red-eye straight from the camera.

With the latest crop of 2013 flagship smartphones, other smartphone-makers are trying to target mobile photographers, social network sharers, and citizen journalists with improved specs and features. Leading the charge early this year was Sony with the 13-megapixel Exmor RS sensor on the Xperia Z and Xperia ZL smartphones that can capture HDR videos and photos. HTC is gunning after rival Nokia with low-light photography by introducing its own image stablization and Ultrapixel camera that can take images in darker environments and Samsung is making it easier for users to be part of their experiences by allowing users to capture images and videos by using both the front- and rear-facing cameras at the same time to create dual image capture. Nokia is rumored to be debuting a 41-megapixel camera on a Windows Phone Lumia model come May.