So, in addition to covering all the news from CES the GottaBeMobile Team headed to MacWorld to cover the release of Apple’s iPhone. No, wait a second. That’s just a dream I awoke from after finally getting some sleep on the plane. The GBM Gang covering it is the dream part. Apple did make news with the announcement of the iPhone yesterday. Some say it completely pulled the rug out from under all the announcments at CES. Tough to say at this point, as like some of the devices we saw on the CES floor, the iPhone won’t really be in folks hands until June, or later.

What we do know is that many of those patents that keep those in the Tabletscape salivating with the hope of an Apple Tablet got worked into the touchscreen device now called the iPhone.Unless Cisco’s lawsuit against Apple forces a name change. 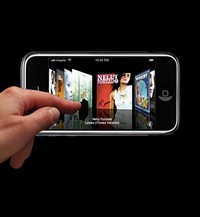 However that shakes out, you can be sure that there will be lots of talk and chatter about the iPhone for the fist six months of the year. You have to admit the multi-touch screen that shows you the functions you need when you need them does sound pretty cool. Time Magazine reports some info around the release including this tidbit about the history of the iPhone that will be interesting to Tableteers.

The iPhone developed the way a lot of cool things do: with a notion. A few years ago Jobs noticed how many development dollars were being spent—particularly in the greater Seattle metropolitan area—on what are called tablet PCs: flat, portable computers that work with a touchscreen instead of a mouse and keyboard. Jobs, being Jobs, figured he could do better, so he had Apple engineers noodle around with a better touchscreen. When they showed him the screen they came up with, he got excited. So excited that he thought he had the beginnings of a new product.