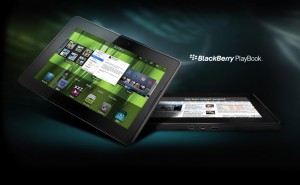 Apple may be the culprit behind Research in Motion‘s delayed launch of the BlackBerry PlayBook tablet, which is now said to be delayed for up to a month after the April 19th release date. According to a report by DigiTimes, RIM may be having difficulties in securing enough touchscreen displays for the company’s $500 7-inch tablet as Apple may have secured inventory of larger touchscreen panels for its own iPad 2 tablet.

As a result, the PlayBook, which was slated to be released in a WiFi-only version in the first quarter of this year, may see its launch date pushed back and the device will launch a month after the iPad 2 began shipping.

In the past, there were early reports that RIM was having difficulties in delivering a device that had adequate battery life, but the BlackBerry-maker quickly denied those rumors stating that it would offer comparable battery life to devices on the market today. The company recently announced support for Android software titles to run on the PlayBook, which will launch with the BlackBerry Tablet OS powered by QNX.

Additionally, another cause of the delay may be due to RIM further testing its software. We had also heard earlier rumors that RIM had anticipated to launch the PlayBook late last year, but problems with its CPU partner caused the company to switch CPU providers and launch in 2011 instead.

The company was also criticized by members of the media for the lack of native email client. The company says that users can pair a BlackBerry smartphone through the use of a secure Bluetooth connection called BlackBerry Bridge to view emails on the phone on the tablet’s larger display. The company will later provide a software update to enable native BlackBerry email viewing on the tablet.

The PlayBook is expected to come in 4G WiMax support for Sprint’s network later this summer. RIM has said that it is looking at 4G LTE and HSPA models, though release dates and availability of those models were not announced.