Though the iPad remains the dominant tablet in the space, Apple is facing increased competition from capable tablets at lower price points, which may affect its tablet strategy and pricing strategy in 2012. According to DigiTimes, the company will introduce, not one but, two new tablets in 2012 to cover the mid-range and high-end tablet market. Both models will have A6 processors, which could potentially be quad-core models since the A5 chipset is Apple’s dual-core CPU found in the iPad 2 and iPhone 4S. The high-end model will have a high resolution 2048 X 1536-pixel display while the mid-tier model retains the 1024 X 768-pixel resolution of today’s iPad 2. 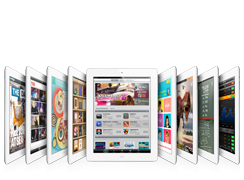 Pricing for the next-generation tablet may potentially start at either $299, $349, or $399 points for WiFi-only models. Apple could potentially even follow its iPhone strategy and sell yesteryear’s iPad 2 models alongside new iPad 3 models.

Apple had shocked the market when it had introduced the original iPad at $500, which forced its competitors to re-think their pricing to remain competitive. With an even lower price point, Apple may do the same to the tablet market yet again, at a time when the Kindle Fire is gaining steam and Microsoft is getting ready to introduce Windows 8 slates to consumers through its hardware partners later in the year.

Apple has also been rumored in the past to be working on a smaller 7- to 8-inch tablet alongside the 9.7-inch model that will be introduced this year. A smaller, lesser expensive model may be Apple’s answer to the Kindle Fire.