Money may make the world go around, but some of the lubricant that greases those gears comes from analysts and the media who report the up and down fortunes of companies trying to sell us stuff. The media and some of those analysts get their information from companies who report sales numbers. Those who follow the game know that sometimes there is fuzzy math when these kind of numbers are reported. That’s one of the reasons some accountants have jobs. As an example, it is reasonably well known that some companies report sales numbers that reflect actual units sold. Others report the numbers of units sold to channels, waiting to be sold to customers. Those are two very different outcomes. 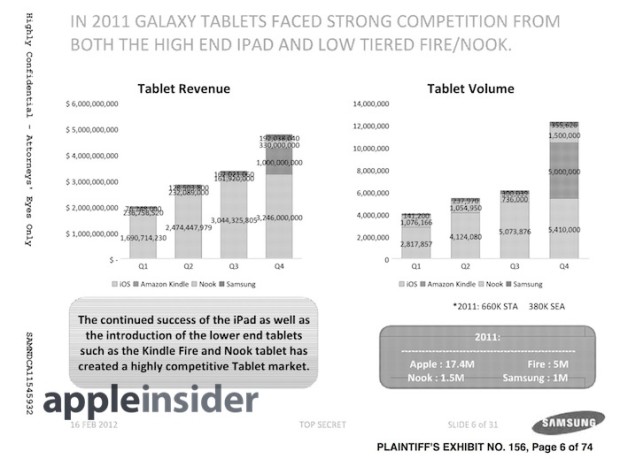 When numbers take a huge swing one way or the other it is typically news and it gets regurgitated all over creation. When information needs to be corrected, and it often does, there is not nearly the same attention.

In the ongoing legal wranglings over patent issues between Apple and Samsung, documents have been revealed that show Samsung misled investors about those numbers. That erroneous information later took on a life of it is own. The documents are supposedly marked “top secret,” which helps give this part of the story even juicier tidbits to track down.

The documents focus on 2011 and 2012. In 2011, Strategy Analytics reported that Samsung had shipped 2 million Galaxy Tabs which resulted in a drop of Apple’s Tablet market share from 95% to 75%. In six weeks. The story since then has been that the iPad is on the decline and Samsung’s Tablets have been on the rise. In fact the story became that Samsung owned anywhere between 17% and 22% of the market as analysts kept hammering the figures home.

Where did the information come from that led to the report? A comment from a Samsung vice-president that is being described as “vague.” Well, as it turns out, Samsung was blowing smoke up not only the respective chimneys of analysts and the media, but also its own chimney.

The truth revealed in this reporting? Samsung took an entire year to reach a sales level of 1 million Tablets. But what’s a million here or there among friends. Samsung’s internal numbers showed it was trailing not just Apple, but Amazon and the Nook from Barnes & Noble. AppleInsider, who is breaking this story, says that Samsung not only couldn’t sell Tablets that competed, but that it had vastly underestimated the market and the effect Apple’s iPad was really having.

The media jumped all over the numbers report and amplified it to the point where it largely became perceived as fact. Except for a few who just didn’t trust the numbers as presented. But in the kind of wave that is typically caused by a media storm, those holding onto skepticism often get washed away with the tide.

AppleInsider is reporting this news as an exclusive. No one can predict how the ramifications and fall out of that report will play in the future. Perhaps the most troubling aspect about all of this is not just that analysts and the media were deceived. It’s not that markets actually moved on these numbers. It’s not that product strategies may have shifted. It’s not investors may have been duped. It’s that deep down many of us knew this was happening in the first place.

Samsung isn’t the only company that does this and it doesn’t just happen in the technology sector. We should all take a moment or two to pause when we see stories about numbers from any source about any human endeavor that shift a story so radically.

I typically take analysts’ reporting on sales projections, numbers, and rumors with the proverbial grain of salt. If I added up all of the accumulated grains it would make Lot’s wife look like a salt substitute. It is always troublesome when you stop to realize that those analysts are paid (and paid well) to provide information to clients so they can invest their money. In this instance it looks like the analysts were either too quick to accept Samsung’s word, or to lax to follow up before disseminating information. Perhaps this might force a change or two. I have my doubts.

As for the media and the tech blogs? I doubt this will change anything in those corners either. The reason? This is old news about yesterday only brought to light today because of a nasty legal battle. I don’t know what the equivalent is for digital newsprint, but in times gone by that news would have already wrapped up quite a few fish.

We’ll still see numbers reported and projected. Those numbers will still get amplified and replayed. But maybe, just maybe there will be a few more folks out there who stop and ask more questions before they start accepting these reports that look so earth shattering in the future. Maybe, just maybe.