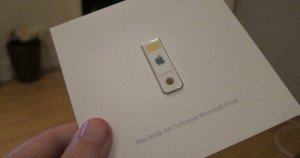 Mobile device users in these parts have been used to creating install images on USB sticks for quite some time. It isn’t a completely painless process, but it saves some aggravation and the use of a USB optical disk drive if and when you need to do a reinstall, or you’re just playing around with different images.

Now that Apple is pushing the new MacBook Air as its next big revolution/evolution they had to pay attention to the complaints that they new were coming about the lack of an optical drive. Historically, Apple has pushed the envelope by marketing devices that did away with floppy drives and other things that became accepted standards. So, in case you need to do a reinstall, Apple is shipping the OS and iLife on a small USB stick in the box with a new Air.

All well and good. The real test of how far this evolution continues is when we see Apple (and perhaps others) selling their software on these sticks over the counter separate from the hardware packages. Already, I’ve seen a number of folks raising questions as to why they have to order iLife on an optical disk that comes shipped in a box. That’s a difference in installing an OS and installing an App package at play. And of course a USB drive would have to come in a package of some kind. But maybe that new App Store for Macs will accelerate a change in how this kind of thing is done.

Keep in mind here there are really two classes of software and software users here. There’s the average Joe/Jane consumer and there’s the Pro software folks. The latter isn’t going to be using a MacBook Air for their work and is most likely going to need an optical drive to handle installs on larger machines for some time to come. So, I think that those saying the optical drive is dead are being a bit premature, at least on that front. That’s that old car and truck analogy at work again.