Apple doesn’t want non-developers using the iOS 6 beta, and to prevent them from doing so, the company is cracking down on sites that sell access to the betas.

According to MacStories, Apple shut down a number of popular iOS beta activation websites in recent weeks. The shut downs come shortly after an article on Wired about the websites. Since Wired published the piece many of the sites linked in the story have shut down and are currently inaccessible.

These sites let users register their iOS device’s UDID (unique device identifier) with an Apple developer for a small fee. The fees are typically around $10, usually a few dollars less. After registering with the websites users can download the iOS 6 beta software even if they’re not a registered developer.

Read: How to Install The iOS 6 Beta For Free 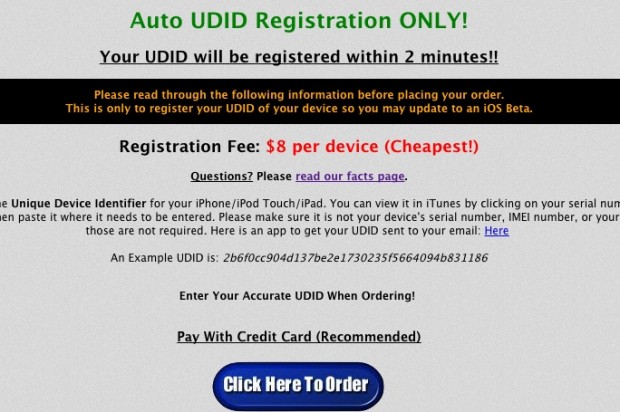 Anybody can sign up as an Apple developer, but to get access to the betas users have to pay $99 a year. That payment lets the developer register 100 devices for the beta. That’s a lot more than the number of people in most independent studios have.

To shut down the websites Apple is submitting DMCA requests to the site’s hosts claiming copyright infringement. The hosts take the websites down shortly thereafter.

The websites make a lot of money before Apple shuts them down, however. One website owner claims in made $75,000 since the June release of the iOS 6 beta. The same owner says they didn’t violate any of Apple’s guidelines, and they intend to relaunch a similar website soon. The the new site will have “better and more secure data lines to handle Apple.”

Last year Apple removed the ability to activate beta devices from developers that sold their activations to similar websites. It’s not clear if the company is also taking this approach their year, or its it’s just shutting down the websites directly.

No matter Apple’s tactics, we doubt it will find and shut down every such website before the final release of iOS 6. Don’t be surprised, however, if more of them disappear from the web in the near future.