Rumors out of China point to an Apple Smartwatch that connects to the iPhone with Bluetooth and displays information on a 1.5-inch display launching in the first half of 2013.

Tech.163, a Chinese news site, reports on supply chain rumors which claim Apple and Intel are working on a smartwatch that would connect to iOS devices via Bluetooth. Mobile Geeks provides a translation of the news, claiming the smartwatch would feature a 1.5-inch OLED display.

This is similar in size to the iPod Nano 6th generation, a small square iPod which many users placed in a watch band turning it into a quasi-smartwatch. The new iPod 7th generation features a larger screen that isn’t as friendly as a watch, leaving an opening in Apple’s lineup. 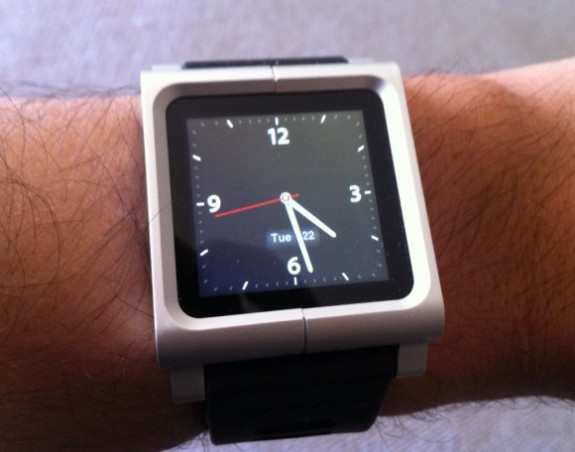 Apple is rumored to be working on a smartwatch similar in size to the older iPod Nano.

Wearable computing is heating up with many smartwatch devices grabbing attention in 2012. The Pebble smartwatch raised over 10 million dollars on Kickstarter after promising a wearable watch that connects to the iPhone. Sony’s smartwatch debuted at CES 2012, but wasn’t able to gain consumer attention.

The WIMM smartwatch we reviewed in early 2012 shows the potential of a connected watch, allowing users to download apps for the watch, pay for coffee with the watch, receive text and call alerts and more, as shown in the video below.

WIMM is no longer selling the WIMM One, and has entered into a confidential agreement with a technology company to use the smartwatch tech.

Intel is an odd choice for a partner, but not completely out of line. Apple uses Intel processors in the MacBook and Mac lineup, but doesn’t rely on the chip maker for mobile products, which run Apple AX processors, made by Samsung. Analyst Gus Richard at Piper Jaffray claimed Apple is looking for a new source of chips after a long patent battle with Samsung, but did not mention Intel in his October report. It wouldn’t be surprising to see an Apple smartwatch arrive in the near future, but it’s easier to expect one without an Intel processor.

If the smartwatch is real and on the way Apple may choose to announce it in March instead of an iPad 5. Apple typically releases a new product in March or April, and with the iPad mini and iPad 4 a month-old, the company may want something new to show off in early 2013.