Investors pushed Apple stock to an all time high of $645 during mid day trading on speculation of the iPhone 5, a new model of Apple’s popular iPhone.

Weeks after lower than expected iPhone sales spurred a sell off on Apple [AAPL] stock, investors are pushing the stock back up on rumors of a September 12th iPhone 5 announcement and a September 21st iPhone 5 release date.

Apple stock fluctuates greatly with earnings reports and the expectation of new products an a seemingly annual basis.

Oddly investors sold Apple while consumers clamored to buy an unreleased Apple product, which if past performance indicates, many will buy as soon as possible, no matter the specs. 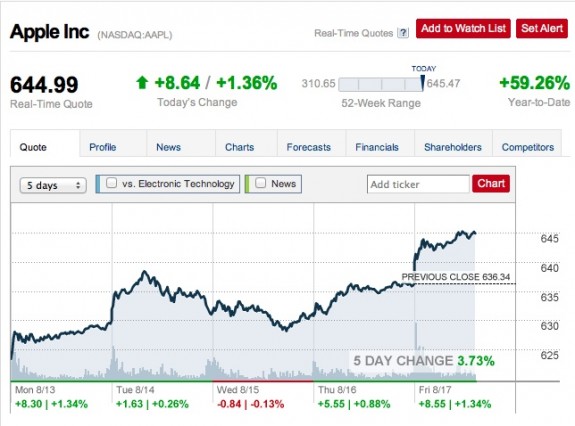 AAPL stock rises to an all time high as investors grow excited about the iPhone 5.

Analysts maintain a high target for Apple stock, ranging from $900 to over $1,000 a share

Investors aren’t just excited about rumors of a larger screen and 4G LTE connectivity. They are pushing the price of Apple stock higher based on the possibility of higher iPhone sales before Apples’ Q4 closes.

With a September iPhone 5 release date, analysts expect Apple will be able to 6 to 10 million iPhones before the month ends, according to Gene Munster of Piper Jaffray.

While the timing of the release date and sales won’t play into the long-term performance of Apple. Analysts estimate that Apple could sell 170 million iPhone 5 devices in the first year.

The rumored iPhone 5 release date plays a major roll in the increase of Apple stock. While there is no confirmation from Apple, reliable sources point to a release on Friday September 21st, with preorders starting as early as Wednesday September 12th.

Apple is almost certain to include 4G LTE on the new iPhone which will allow users to download apps, stream movies and Facetime at connections 10 times faster than the iPhone 4 and iPhone 4S.

Catch up on the iPhone 5 news in 10 minutes.