Apple stock is on a tear, going above $500 for the first time in company history weeks before the company is expected to announce the iPad 3, a third generation of the best selling consumer tablet.

Apple Stock [AAPL] has dropped back below $500 as I write this post, but that doesn’t detract for the high of $503.83 from early this morning.

While we are used to seeing stock prices jump on days when Apple reports record quarterly profits and in the days following a product announcement, the stock climb today isn’t tied to hard numbers or new hardware you can touch.

(Read more about What to Expect from the iPad 3)

Investors are buying up Apple stock ahead of the iPad 3 announcement which is expected in early March. We expect that the iPad 3 will have a number fo new features, most notably a Retina Display, that brings the clarity and high resolution found on the iPhone 4S to the iPad for the first time. 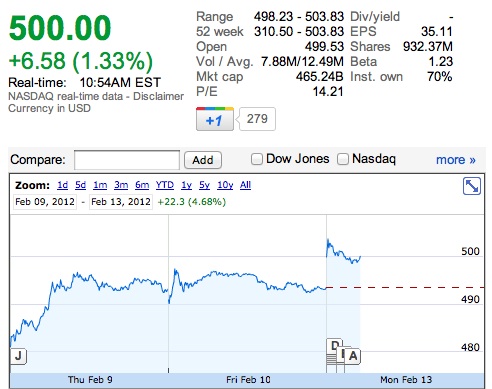 Last quarter Apple announced that the company had beat analyst expectations for iPhone and iPad sales. Apple sold 37 million iPhones in the first quarter of 2012 and 15 million iPads, equating to 377,959 iPhones every day, or about 262 iPhones a minute and 157,000 iPads a day, or 109 iPads a minute.

Apple investors have typically shied away from Apple stock right after major announcements, waiting for the reaction of the public and tech pundits before buying Apple stock again. I wouldn’t be surprised to see AAPL jump back over $500 today and to see a drop again when the iPad 3 release date is announced in early March.