Apple Store Down Ahead of iPad Air Orders

In the U.S., the Apple store is currently down ahead of when Apple will begin taking orders for the iPad Air. This year, Apple had refreshed and redesigned the iPad Air, the 9.7-inch successor to the fourth generation iPad that Apple had sold as merely the iPad with Retina Display.

Apple had promised that it would begin sales of the slate on November 1st when it had introduced the iPad Air.

Along with the iPad Air, the iPad mini was also given a refresh. Though the new iPad mini keeps the same design and form factor, the tablet gains a Retina Display resolution screen and updated internals that keep it aligned with the iPad Air and the new iPhone 5s. This year, all iPad tablets–the Air and the mini with Retina Display–come with the ne 64-bit Apple A7 ARM-based CPU that brings huge processing and graphics improvements. Also, storage configurations for both tablet lines now start at 16 GB of storage and max out at 128 GB with options for 4G LTE connectivity. 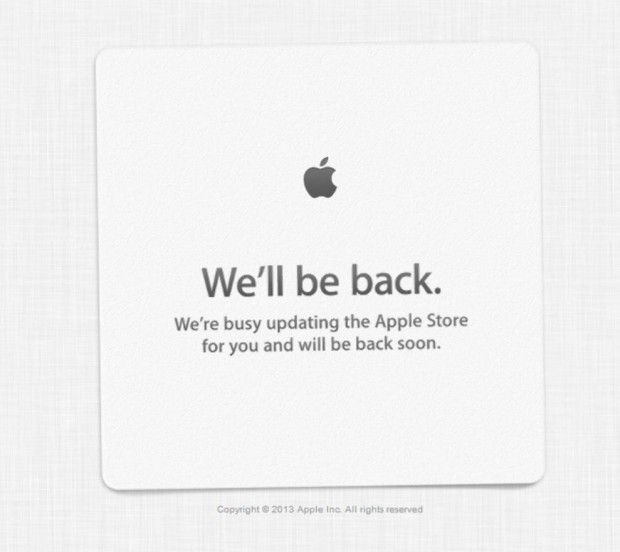 Apple did not indicate if it will offer preorders for the smaller 7.9-inch iPad mini with Retina Display this year, but CEO Tim Cook alluded that component shortages may mean that demand for the mini may outstrip Apple’s supplies, causing delays in shipping.

Which tablet will you be buying this year? And will you be pulling the trigger in ordering the iPad Air tonight once the clock hits 12:01 AM Pacific Time on November 1st?